5 ways to get your business strategy right 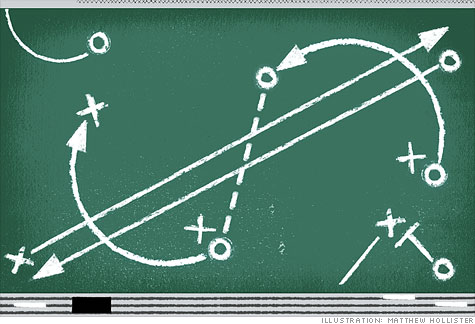 FORTUNE -- Fired up about your company's strategic plan? Great, but before you commit the rest of the year to executing it, make sure you pass these five litmus tests. If not, head back to the drawing board with your management team.

Remember: You're betting your company's future on your strategic plan. If you haven't gotten the details right or shaped it from the proper perspective, those two days you spent at your offsite will ultimately hurt your company. There's still time to polish it so that you can make the most of 2011.

Worried that profits were declining, Randy Cohen, founder of Ticket City, an Austin-based ticket broker, laid off workers and cut managers' pay in 2008. Then Cohen came across an old article about his once-growth-oriented company titled "Don't Be Afraid." He realized he'd slipped into playing defense. So he changed his mindset, hiring 10 new people, investing more in marketing -- and driving revenue from $30 million to $40 million in 2010. Profits rose as well. And he's raised the ante further, sponsoring a new nationally televised college bowl game, the Ticket City Bowl. That's playing offense!

Coastal Contacts, one of the largest online contact-lens retailers in North America, came out of its two-day planning session at a loss for how to rev up growth. So over the next six months CEO Roger Hardy and his senior team called customers each week to see whether they had any ideas. To the company's surprise, one recurring theme emerged -- customers wanted lenses the next day. "We started overnighting everything," he reports. Sales in the U.S., where he recently made the change, were up 41% for 2010, bringing company sales to $155 million.

If you act on every suggestion your customers make, they can "want" you into bankruptcy. At customers' request, Hardy, who also sells eyeglasses at Coastal Contacts, started letting them choose and try on four frames at home, then place an order and return the testers. Data soon showed that shoppers who tried on multiple frames were just as likely to return purchases as those who ordered just one pair. Hardy canceled the program because the added shipping costs weren't offset by additional sales.

Doug Schukar was thrilled when USA Mortgage, his residential mortgage bank in St. Louis, increased the loans it funded from $113 million in January 2009 to $1.2 billion by the end of the year. While other lenders struggled, he ramped up his sales efforts. Yet by failing to keep key middle managers informed of growth plans such as acquisition, he let them get blindsided by the work that came from the company's rapid expansion. Result: Almost all resigned, and he hired replacements. Today he includes middle managers in annual and quarterly planning sessions.

A few years back CEO Tony Petrucciani and his team at Single Source Systems, a software firm in Fishers, Ind., set 15 annual goals, such as automating some of its software functions. But the company, which got distracted by having so many items on its goal list, missed its $8.1 million revenue benchmark by 11%. "Nobody focused on any one thing," he says. Going forward, Petrucciani decided to set just a few key priorities. Last year the company met its goal of $10 million in sales. How many priorities do you have for 2011? Less is more!

--Verne Harnish is the CEO of Gazelles Inc., an executive education firm.

6 ways to grow your business