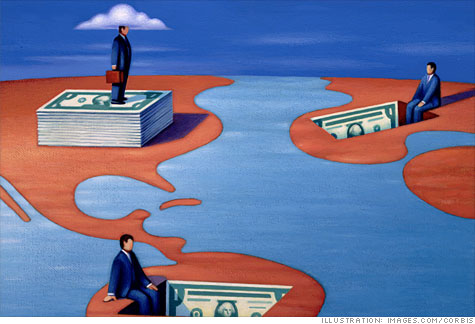 FORTUNE -- No financial topic is more hotly debated right now than the loopholes that allow America's multinationals to avoid paying U.S. taxes on foreign earnings. Witness the flap over General Electric's (GE, Fortune 500) tax avoidance practices, and the dueling reform proposals before Congress. So it would be useful to know just how big those profits really are, how fast they're growing, and which players and industries benefit most from a system that investors seldom understand, and that the companies themselves are highly reluctant to clarify.

Getting that information requires considerable financial excavation and analysis, since the details on how much profit companies retain overseas is buried in often cloudily-worded footnotes in their annual reports and 10-Ks. Fortunately, accounting expert Jack Ciesielski has done the digging. Ciesielski's newsletter, The Analyst's Accounting Observer, is highly prized by money managers for its lucid explanation of how America's complex bookkeeping rules illuminate or obscure the true, underlying economics of corporations. For example, Ciesielski campaigned courageously, and successfully, for new rules that recognized stock option grants for what they are -- a big expense. He also exposed the practice of using wildly optimistic assumptions on pension fund returns to book phantom earnings that will never materialize in cash.

Ciesielski's examination of the foreign tax issue yields two conclusions. First, corporations can't tap a giant portion of their earnings for dividends or buybacks, or to pursue promising acquisitions or investments in the U.S. unless they pay a huge tax to the government. Most shareholders don't even know it. Second, proposed solutions -- especially the "tax holiday" proposal -- will only encourage companies to keep profits sequestered abroad.

First, here's a primer on rules governing foreign profits. When the subsidiary of a U.S. company in Ireland or China generates earnings, the parent pays local taxes on those profits. Those earnings are exempt from U.S. corporate taxes so long as the parent has no intention of ever shipping the cash back to America. Since the U.S. imposes one of the world's highest corporate tax rates at 35%, companies exploit the exemption by parking and reinvesting earnings in low-tax nations such as the Republic of Ireland, where the levy is just 12.5%.

In a recent newsletter entitled "Over There: Where U.S. Earnings Rise," Ciesielski finds that for the S&P 500, "untaxed" foreign earnings (meaning untaxed in the U.S.) totaled $181 billion in 2010, or 23% of the total profits of America's largest companies. Those foreign earnings are heavily concentrated clusters of industries and companies. According to Ciesielski's estimates, no less than 51% of health care profits in 2010 remained abroad, beyond the reach of the U.S. Treasury. The figure was 45% for technology, 25% for industrials, 23% for materials, and 22% for consumer staples.

Ciesielski also tracks the total untaxed profits that have accumulated over the years in those foreign subsidiaries, and now sit on their books in the form of retained earnings. In 2005, following a "tax holiday" that allowed companies to return profits without penalty, the total stood at $452 billion. Since then, it's grown at 22% a year, and now totals a staggering $1.2 trillion.

See 10 companies with the most untaxed foreign income

Reinvesting profits in India, China or Indonesia makes a lot of sense, and not just for tax reasons. Investment opportunities in those fast-developing countries are often more lucrative than in the U.S., though not always. Nor are the profits that grow more or less permanently abroad anything like the phantom earnings booked from fantasy pension fund returns. It's real money, in generally strong currencies, which can be quickly translated into dollars.

The rub is that the amount of those earnings available to shareholders is a lot lower than it appears on the companies' books. The consolidated income statement shows profits as if they are reinvested in the local country; only the local tax is subtracted. But the parent would need to ship that money back to America in order to pay out dividends or repurchase stock. That would require paying the extra U.S. tax, and those extra levies would severely shrink the reported annual earnings that come home. Or, if the parent were to repatriate past years of accumulated past profits, it would lower the corporation's cushion of retained earnings.

For Ciesielski, the system combines accounting confusion with an incentive to keep money outside the U.S., where it would nurture higher growth. "The shareholders in effect can't get their hands on those earnings unless the U.S. tax is paid, and in that case the earnings, once they come home, would be a lot smaller than reported," he says. "The system is confusing to investors. It also limits the ability of companies to steer money to investments in the U.S. when they're more profitable than they are overseas before tax, but less profitable after our high rate is applied."

One "solution" that corporations love, and that's been used before, is a tax holiday allowing U.S. corporations to bring home current and retained earnings without paying any of the extra bill that now keeps the money in China or Ireland. House Majority Leader Eric Cantor (R-Va) is touting a temporary waiver allowing companies to repatriate cash tax-free.

It's a bad idea. Corporations will simply distribute the cash they bring back to U.S. to shareholders every few years when they get a tax holiday. But over the years that follow, they'll keep reinvesting profits in low-tax countries. U.S. investors might get the dividends after a long wait, but low-tax nations will keep getting the factories, call centers, and labs. Why? Because the after-tax rates of return on those investments will be higher in low-tax countries, even if it's just as profitable before taxes to build the plants in the U.S.

The game will be growing profits where they're taxed least, and then lobbying for permission to bring them home in a few years -- not to reinvest in the U.S., but to pay them out in buybacks or dividends.

A far better solution is to lower the U.S. tax rate to make after-tax returns in the U.S. more competitive with those in a China or Dubai. In the 2012 budget proposal, Congressman Paul Ryan (R-Wis) recommends lowering the levy to 25%. Narrowing the tax differential would inevitably make building biotech plants and research facilities here far more attractive.

Lowering corporate rates would also allow companies to pay far bigger dividends. Remember, half the earnings of tech and pharmaceutical giants, those quarantined abroad, aren't even available for dividends or buybacks. The puny dividend yield in the U.S., now under 2% on the S&P, is a nagging source of frustration for investors.

"A tax holiday is a waste without solving one of the underlying problems, which is the big differential between U.S. and foreign corporate taxes," says Ciesielski.

But Ciesielski cautions that lowering the U.S. tax rate is only half of the solution. The other half is eliminating the glaring loophole, the "indefinite reinvestment exception" that allows U.S. companies to keep profits overseas free of U.S. tax. "Corporations should be required to book a deferred tax charge on all foreign earnings," says Ciesielski. "Then, they wouldn't worry about bringing home those earnings because they've already provided for the taxes."

As long as there's any differential between U.S. and foreign rates -- say the rate in the U.S. drops to 20% versus 12.5% in Ireland -- American companies will engage in "tax arbitrage" by keeping foreign earnings abroad.

But if the exception is eliminated, that incentive would disappear. So let's scrap the loophole that keeps those earnings creating jobs and factories abroad, but at the same time, make investing them at home far more profitable and competitive by lowering the excessive U.S. corporate tax rate.

Jack Ciesielski is a sage who makes accounting speak with eloquence and clarity. The politicians should listen.

Bean counters wanted: Why the Big 4 are in a hiring frenzy
Subscribe to Fortune