Goldman blasted for conflicts of interest 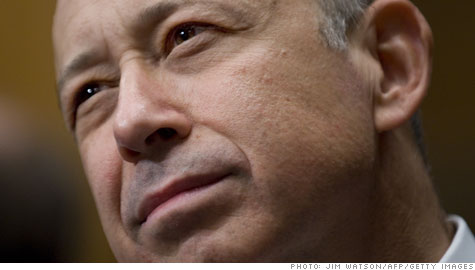 Senate panel calls Goldman Sachs a 'case study' of the recklessness and greed that set off the 2008 financial crisis. By Ben Rooney, staff reporterApril 14, 2011: 9:40 AM ET

NEW YORK (CNNMoney) -- A Senate panel issued a scathing report Wednesday that describes Goldman Sachs as a "case study" of the recklessness and greed on Wall Street that set off the 2008 financial crisis.

The 600-page report also blames the lending practices of big commercial banks, such as the now-defunct Washington Mutual, for plunging the U.S. economy into a painful recession.

The regulators who failed to crack down on the banks, including the Office of Thrift Supervision, are faulted for their cozy relationship with Wall Street, as are the major credit rating agencies, Moody's and Standard & Poor's.

"Our investigation found a financial snake pit rife with greed, conflicts of interest, and wrongdoing," said Senator Carl Levin, chairman of the Senate subcommittee charged with investigating the causes of the financial crisis.

The subcommittee, which spent two years on the investigation, based its report on thousands of internal company documents and emails, as well as hundreds of interviews and Congressional testimony.

The subcommittee singled out Goldman (GS, Fortune 500) and Deutsche Bank (DB) as examples of Wall Street firms that reaped huge profits by marketing securities backed by subprime mortgages as safe investments to clients, even as the banks bet against these very same securities.

Goldman paid a record $550 million fine to the Securities and Exchange Commission in July to settle charges it misled investors in the 2007 sale of a collateralized debt obligation, or CDO, known as Abacus.

In addition to Abacus, the subcommittee outlined three other CDOs where it says Goldman had conflicts of interest.

According to the report, Goldman told investors in a CDO called Hudson that its interests were "aligned" with those of the investors. However, the report said Goldman held 100% of the short side of the CDO and had "adverse interests to the investors."

How can we address excessive CEO pay?

Goldman also told investors that Hudson's assets were "sourced from the Street," suggesting the underlying bonds were picked by outside investors. However, Goldman had selected and priced the assets without any third-party involvement, the report said.

"Goldman is still hiding the fact that they were the beneficiaries of the failure of the Hudson CDO," said Levin.

"While we disagree with many of the conclusions of the report, we take seriously the issues explored by the Subcommittee," Goldman said in a statement. The bank said it has reviewed its business practices and is "committed to making significant changes that will strengthen relationships with clients," and improve transparency and disclosure.

Senator Levin said he plans to refer potential cases of conflict of interest to the Justice Department and the Securities and Exchange Commission, adding that he believes the SEC has been "slow to act."

"In my opinion, they (Goldman) clearly misled their clients and they misled the Congress," Levin added.

The report echoes some conclusions reached by the Financial Crisis Inquiry Commission, which was split along party lines and released two competing reports on the causes of the crisis in January.