Muni bonds that won't blow up 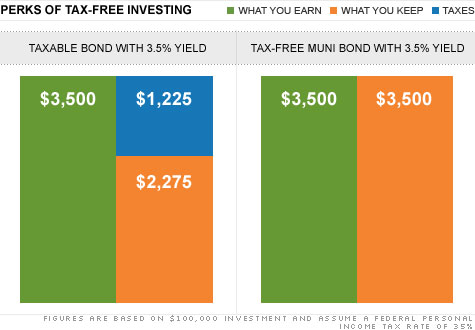 NEW YORK (CNNMoney) -- The municipal bond market is finally starting to recover from a severe winter slump, and some experts say the outlook for state and local government debt is sunnier than ever.

Investors dove out of munis late last year after headlines about looming defaults sparked a heavy sell-off, with some $30 billion being pulled out just between Dec. 1, 2010 and March 31 of this year, according to the Investment Company Institute.

Though investors continue to pull money out of the market, redemptions have slowed in recent weeks.

"The fear over a massive wave of impending defaults is overblown and uninformed, but the reality is that state and local government are dealing with deficits, and some issuers are better than others," said Joe Darcy, head of municipals sector at Hartford Investment Management.

But investors should proceed with caution. States like Illinois and California continue to make headlines over their budget troubles so those may not be the best bets.

"Investors need to be selective, and need to watch out for states with particularly high unemployment, low unemployment growth and the ones that make the news for political budget battles," warned Richard Ciccarone, managing director and chief research officer at McDonnell Investment Management.

On the local level, experts are big fans of revenue bonds issued for essential services, such as electric power, or water or sewer systems, since they provide reliable income streams and are often of high credit quality.

"Whether the economy goes up, down or sideways, people have a need for services like clean water, so people will pay for those essential services," said Darcy of Hartford Investment Management.

3 reasons why munis are still safe

Ultimately, the safest bet for investors seeking exposure to munis may lie with mutual funds and exchange traded funds.

"We've found that these funds outperform their peers and control risk from both a credit perspective and a duration perspective," Rosenbluth said.

Why munis? The big attraction of muni bonds over Treasuries lies with the tax-free structure. Many munis are exempt from federal taxes and often from state and local taxes as well.

Treasury yields have been abysmal, as the 'flight to safety' play has pushed Treasury prices sky high and yields very low. The 10-year yield has hovered around 3.5% for months.

Revenge of the muni bonds

"Both muni bonds and Treasuries are considered to be low-risk investments, but the yields on high-quality muni bonds are more appealing in comparison," said Rob Williams, director of income planning at Charles Schwab.

But here's where investors win with munis.

However, an investor who falls in the 35% federal tax bracket would only get $2,275 because of the tax bill, while a muni investor would get the entire return, free of tax. The taxable bond would need to yield at least 5.4% to match the lower yielding, but tax-free, bond.