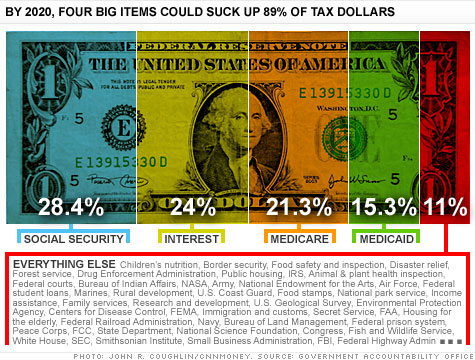 NEW YORK (CNNMoney) -- In making the case for why lawmakers need to tackle the long-term debt, President Obama chose the one projection that brings home the point better than any other.

By 2025, he noted last week, Medicare, Medicaid Social Security and interest on the debt will suck up virtually all federal tax revenue.

"That's it," Obama said. "Every other national priority -- education, transportation, even national security -- will have to be paid for with borrowed money."

But the cash crunch would be felt even sooner.

By 2020, spending on Medicare, Medicaid, Social Security and interest on the debt will leave only 11 cents of every federal tax dollar to fund everything else the government does, according to projections made in March from the Government Accountability Office.

The good news, if you can call it that, is that in January the GAO had projected there would only be 8 cents left over, but since then the agency has cut its estimate of how much interest the government will have to pay.

In any case, 11 cents is still much worse than the 24 cents that the government has left over today after paying for the big four line items.

So how much of "everything else" can 11 cents buy? Not a lot, especially relative to what Americans are accustomed to their government providing.

Consider this: In 2010, Uncle Sam took in $2.162 trillion in federal revenue. If the government only had 11% of that left over to pay for "everything else," it would have had all of $238 billion to work with.

Here's a sampling of what $238 billion would have bought last year:

Beyond 2020, the 11% to pay for "everything else" would get whittled down to zero percent.

By 2040, there would only be enough in federal tax revenue to pay for interest on the debt and most of Social Security.

Sure, the country could try to borrow to pay for what revenue can't cover. But given the magnitude of what would have to be borrowed, the interest costs alone would be prohibitive. (Take CNNMoney's debt quiz.)

Another alternative: the government could abruptly raise taxes sky high and cut spending to the bone.

And that's why Susan Irving, GAO's director of federal budget analysis, and others say lawmakers and the public need to ask themselves: What do we want government to do? What will it cost? And are we willing to pay for it?

"Everybody wants a small government. Everybody would like low taxes. And they'd like government to do everything that they think government should do," Irving said. "But the arithmetic can be a problem."