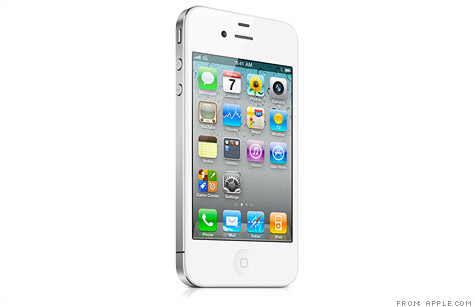 NEW YORK (CNNMoney) -- The white iPhone 4 can really, truly, finally be yours on Thursday.

A full 309 days after it was supposed to be launched, Apple (AAPL, Fortune 500) said it has discovered the secret sauce to manufacturing its smartphone in a white casing, and it is ready to put the device on sale at Apple, Verizon (VZW) and AT&T (T, Fortune 500) stores across the country.

"The white iPhone 4 has finally arrived and it's beautiful," Phil Schiller, Apple's chief marketing officer, said in a prepared statement. "We appreciate everyone who has waited patiently while we've worked to get every detail right."

Apple simultaneously dropped another major piece of iPhone news: Its explanation of the location-tracking data file researchers discovered and publicized last week. Apple released a Q&A on the issue Wednesday morning, calling it an unintentional glitch.

"The reason the iPhone stores so much data is a bug we uncovered and plan to fix shortly," Apple said. (For more on Apple's location-tracking comments, see: Apple blames iPhone tracking file on 'bug')

The mythic white phone: Dozens of buyers lined up Thursday morning at Apple's New York City flagship store to snap up the first available white iPhones. Many already had black iPhones, but wanted to swap for the newest and coolest gadget.

"I don't technically need it. It's more of an aesthetic thing for me," said shopper Brandon Nuccio.

The black iPhone 4 went on sale June 24, 2010, but the white version was unavailable at launch. Apple released a press statement that day, saying the white models have "proven more challenging to manufacture than expected, and as a result they will not be available until the second half of July."

A month later, Apple said it was still working out the bugs in the manufacturing process, and devices wouldn't be available until "later" in 2010.

Then, in October 2010, the white iPhone finally became available for presale online -- for exactly one day. Then Apple retreated and pushed the date back to the spring.

Eventually, Apple just took the white iPhone off its website entirely. It finally reappeared on Wednesday with an official statement from Apple that it is ready to go on sale.

Apple never stated exactly what troubled the white iPhone 4. The iPhone 3GS was available in white, as is the iPad 2. Rumors have circulated that Apple had trouble getting the white pigment just right, that light on the white iPhone 4 was leaking through its glass back, or that light leakage was interfering with its ability to take accurate photographs.

Even though the iPhone 4 has been on the market for nearly a year and about 57 million black iPhone 4 devices have been sold, some analysts say the white version will be a boon to sales of the iconic device.

"The delayed launch of a white iPhone has created a certain mystique around the product," said Brian White, analyst at Ticonderoga Securities. "We expect incremental iPhone 4 purchases due to this launch, driven by replacements, upgrades and/or new iPhone 4 purchases."

White expects the white iPhone to incrementally increase iPhone 4 sales by between 1 million and 1.5 million per quarter until the iPhone 5 is launched.

The white iPhone 4, in 94 characters