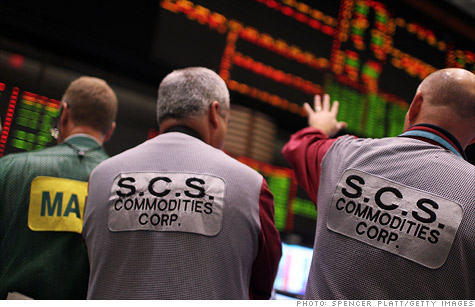 That's the message from Fatih Birol, chief economist at the International Energy Agency.

"Speculators are only responding to what is going on in the markets," Birol said during an interview with CNNMoney in New York. "We don't see enough oil in the markets. The major driver is supply and demand."

Birol said growth in worldwide oil demand is outstripping growth in new supplies by 1 million barrels a day per year.

Much of that new demand is coming from China.

China is adding nearly 20 million vehicles to its roads each year, he said, and is responsible for fully half of the world's demand growth. He noted the growth in China's oil consumption is equal to all of the new output expected from Iraq over the next few years.

This is not good news for American drivers, currently paying an average of nearly $4 a gallon at the pump.

Check gasoline prices near you

"We have to learn to live with these higher prices," said Birol, who declined to say exactly how high oil will go. "They are here for a long time."

The International Energy Agency represents oil consuming countries like the United States, European nations and Japan. It was formed following the Arab oil Embargo in the early 1970s and is responsible for shuffling strategic oil reserves between developed nations during a time of crisis. It also conducts extensive research on world oil markets.

Some argue that the world has plenty of oil, it's just that it's trapped in shale rock, tar sands or other types of formations.

Birol said there are challenges extracting that oil, which include cost and environmental impact.

"There's a difference between having those reserves in the ground and having them at the gas pump," he said.

Birol's bleak view is not shared by everyone.

Other analysts say plenty of new production from places like Iraq and off the coast of Brazil should combine with sluggish worldwide economic growth to create an oil glut for at least the next few years. They place most of the blame for high prices on Wall Street and not soaring demand or price gouging from companies like Exxon Mobil (XOM, Fortune 500), BP (BP), Chevron (CVX, Fortune 500) and Royal Dutch Shell (RDSA).

Birol said there's not much U.S. politicians can do in the short term to lower oil and gas prices.

In the long term, he said the United States should focus on increasing its own domestic oil production and limiting consumption through higher fuel efficiency standards and better incentives for electric cars.

He indicated that limiting consumption is where the United States could make the most difference, as 90% of the world's growth in future oil production will come from North Africa and the Middle East.

"Oil will be more and more expensive unless countries like the U.S. and China use less," he said.

"The door may be closing to address climate change," he said. "The infrastructure [for clean energy] is not being built in the emitting countries."