What happens if Congress blows the debt ceiling? 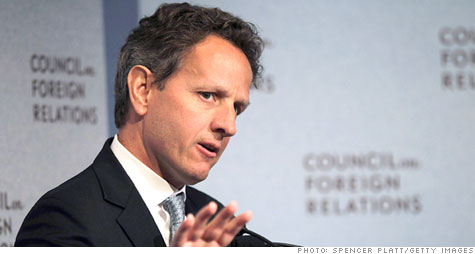 Geithner has said the country would risk default if Congress doesn't raise the country's legal borrowing limit by July 8.

Indeed, the Treasury Department takes in about $177 billion a month on average. And interest on public debt only costs $19 billion.

That's good. He can pay the interest. But it's hardly the whole story.

Average monthly spending -- minus interest -- is $276 billion. That means Geithner will be short $118 billion every month to pay all the bills the country has incurred.

Translation: There may be times when Geithner comes up far shorter than $118 billion.

Either way, he would be put in the completely ridiculous position of having to prioritize who besides bondholders should get paid first and which federal contractors and programs would be effectively issued I.O.U.s payable when Congress comes to its senses and raises the debt ceiling.

It's a ridiculous position to put any treasury secretary in because the debt ceiling is not a cause of rising debt or a "license to spend more" -- as some incorrectly allege. It simply authorizes Treasury to pay the bills Congress chose to incur when it passed years worth of spending increases and tax cuts that are now law.

"The decisions that create the need to borrow are made separately from -- and generally earlier than -- the decision about the debt limit," according to a report from the Government Accountability Office.

In any case, paying bondholders first while shirking other obligations wouldn't necessarily protect the country from the perception that it's in default.

Geithner himself equated the situation to a homeowner who pays his mortgage but puts off his car loan, credit cards, insurance premiums and utilities. Even though the mortgage would be taken care of, the homeowner's credit could still be damaged.

Since it's never happened before, it's not clear to anyone -- no matter what they say -- how markets, businesses or average Joes would view the country if it has to indefinitely stiff contractors or government programs.

What is clear, however, is that the situation wouldn't exactly bolster the United States' reputation.

"There's a hard-to-make-tangible loss of face for the United States. It's embarrassing," Marron said.

The long-term debt situation absolutely needs to be addressed. But it's a mystery why lawmakers -- so all of a sudden flummoxed about the problem they helped create -- would actually want to risk borrowing yet more trouble for the country just to make the political point that they're really serious about fiscal responsibility.

Especially since it's their job to responsibly manage the country's books all the time, not just when they create the threat of a crisis that, handled badly, could hurt the country's financing and credit reputation.