Who gets bin Laden's $25 million bounty? 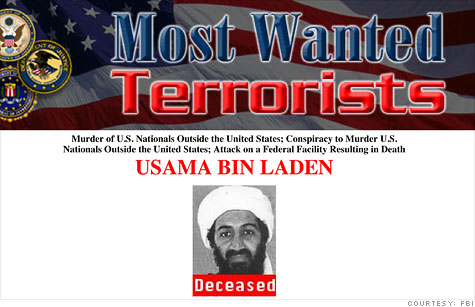 The government has offered $25 million for information on the terrorist leader. By Ben Rooney, staff reporterMay 2, 2011: 6:24 PM ET

NEW YORK (CNNMoney) -- The photograph of Osama bin Laden on the FBI's Most Wanted Terrorists list has a new caption: Deceased.

But it was unclear Monday how much, if any, of the up to $25 million in reward money offered on the terrorist leader has been granted.

The man behind the worst terrorist attack in U.S. history was killed Sunday by American forces in Pakistan, in what President Barack Obama called "the most significant achievement to date in our nation's effort to defeat al Qaeda."

In the 10 years since the 9/11 attacks, the CIA, the FBI and other intelligence agencies have worked to locate bin Laden, who was found living in a compound outside of Islamabad.

The use of reward money has become an important asset in the government's fight against global terrorism.

The Rewards for Justice program, run by the U.S. State Department's Bureau of Diplomatic Security, has paid out more than $100 million to over 60 people since it was created in 1984.

The program grants money to people who provided "actionable information that put terrorists behind bars or prevented acts of international terrorism worldwide," according to a statement on its website.

"The department does not generally discuss nominations for awards," said Harry Edwards, a spokesman for the State Department. The offer, he added, is for a maximum of $25 million. "If it were paid, it could be less."

It is possible that no reward money will be granted. According to Obama administration officials, unidentified detainees provided a key piece of information that helped investigators locate bin Laden.

But rewards have been granted for the capture of other international terrorists, including Ramzi Yousef, who was convicted in the 1993 bombing of the World Trade Center.

The largest reward ever paid under the program was $30 million to one person who provided information on Uday and Qusay Hussein, the sons of Iraqi dictator Saddam Hussein. In 2003, after an intense firefight with U.S. forces, both brothers were killed.

The government is currently offering up to $25 million for information on Ayman Al-Zawahiri, al Qaeda's second-in-command, and an heir apparent to bin Laden.

The average reward offered for the 30 other terrorists on the most wanted list is $5 million.

In 2008, the maximum reward was raised to $50 million for any one target, but Secretary of State Hillary Clinton has not authorized that amount, according to Edwards.

For safety reasons, the State Department generally does not disclose details about the recipients of rewards. But officials may announce the amount rewarded in certain high-profile cases.

There have been four public award ceremonies in the Philippines, including one in 2007 where a total of $10 million was awarded.

In addition to the $25 million bounty offered by the government, the Airline Pilots Association and the Air Transport Association have offered a combined $2 million reward for information on bin Laden.

Steve Lott, a spokesman for the ATA, said the association has not received any formal request for supplemental reward money. But he said the ATA could grant up to $1 million in additional funds under a long-standing anti-terrorism program with the government.

The APA did not immediately respond to calls requesting information on the reward.