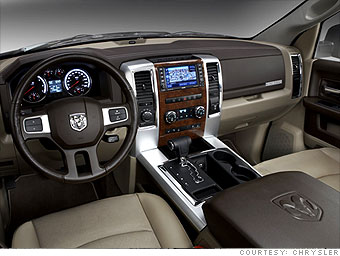 The interior of 2009 Dodge Ram is the first fruit of Chrysler's new Interior Design Studio. In addition to the appearance, material quality and construction are also improved..
•  Chrysler's hits and misses

Customers are clamoring for fuel-sipping vehicles, but Chrysler stopped the production of its best-known small car, the Neon, more than a year ago. Competitors laughed when a Chrysler executive said the company would introduce an electric vehicle in three to five years -- later than just about everybody else.

A more immediate priority is improving the quality of the cars Chrysler builds now, ranked by Consumer Reports as the worst among 15 automakers.

Cost cutters during the Daimler era replaced ornamentation in some models with less expensive materials that looked cheap. Nardelli has given chief designer Trevor Creed the leeway to spend more money on higher-quality materials and precision assembly.

"We've got to raise our own expectations about what customers should receive," Creed says.

Where a modest freshening won't do, the new team is going for a total overhaul.

Although the midsized Sebring sedan has been on the market less than two years, management has created a team to perform a complete redesign.

By intensely studying customer preferences early, as the Japanese have long done, the team hopes to limit changes late in the design cycle.