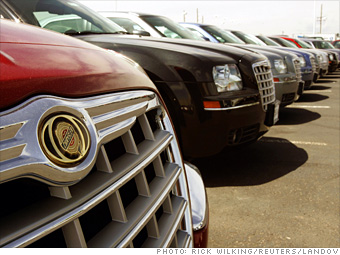 Chrysler 300 sedans sit on a dealer's lot. Chrysler will need more than just another one-off hit like the 300 to bring itself back from the abyss.
•  Chrysler's hits and misses

Chrysler's sales are down nearly a third more than any other major manufacturer's. Right now its lineup is totally unsuited to the realities of the marketplace. So has Cerberus, named after the three-headed hound that guarded Hades, bought a dog?

Not necessarily. One way forward would be to form a partnership or sell Chrysler's most valuable parts -- Jeep, Dodge Truck -- to another automaker, or to merge its finance arm with GMAC, which Cerberus also controls.

The likeliest buyer of Chrysler's pieces would be a foreign automaker that wants a larger presence in the U.S. Fiat's name has surfaced, but Nissan's name is heard the most.

The fast-rising Japanese automaker and its aggressive CEO, Carlos Ghosn, have long sought an American partner to diversify its currency risk, plug holes in its product lineup, and expand its distribution. With the yen strong, the dollar weak, and the market soft, Ghosn can afford to be patient. For his part, Nardelli says he is too.

"We talk to Carlos about product," he says. "If he wants to talk about something beyond that, he can talk to New York," where Cerberus is located.

Brave words, but the fact is that Chrysler could tumble into bankruptcy with just a couple of bad months. And Cerberus has its reputation, as well as its investors' money, at stake.

NEXT: Prognosis for recovery