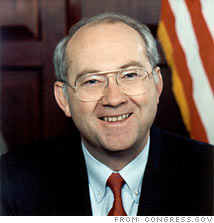 The former economics professor and Senator from Texas is a famous fiscal hawk and a longtime McCain ally on spending cuts. Gramm is said to be front-runner for Treasury Secretary.Gramm has been an investment banker at UBS since retiring from the Senate in 2002, where he had served since 1985.