Soaring energy prices have created a bull market in villains - some more plausible than others. A scorecard 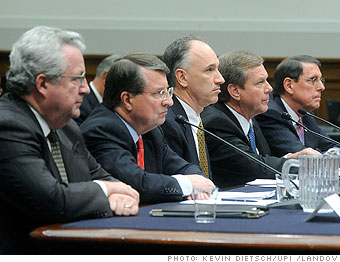 The CEOs of the country's largest oil companies, testifying before Congress, reject claims that they're responsible for sky-high oil prices.

The theory: Big oil companies are pushing prices up to boost their profits, which have soared to record levels in recent years. Top industry executives recently got hauled before Congress, where legislators pressed them for an explanation for rising gasoline prices - and outsize executive pay at companies like Exxon, which earlier this year posted a $40 billion profit for 2007.

Reality check: Executives acknowledge that company profits are high, but argue that their share of the global oil market is small. Exxon, the biggest U.S. oil company, ranks 14th in the world in terms of oil reserves. The companies also note that refining margins - reflecting the business of turning crude into gasoline - have dropped sharply over the past year. Exxon said that even with the price of gas hovering around $4 recently, the tight margins mean the company's refining profit is only a dime a gallon. Perhaps that's why Exxon shares, after doubling between 2005 and 2007, have actually lost ground this year.
By Colin Barr, senior writer