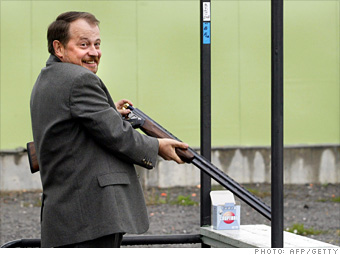 Since Lisin's hard-working younger days - he started his professional life in a coal mine, the story goes - he's taken a slow and steady approach to building a name for himself. The university professor rose through the steel industry from a foreman post, eventually gaining control of Novolipetsk and ultimately buying out fellow steel magnate Vladimir Potanin's share of the mill in 2002. Novolipetsk was listed on the LSE in 2005, and this August it expanded its U.S. presence and entered what Lisin called the "highly attractive U.S. pipe and tube market" with the pending $3.5 billion purchase of steel-pipe manufacturer John Maneely. But of course, Lisin's no stranger to big purchases. In 2005 he pledged $280 million to develop a St. Petersburg port in which he already owns a controlling stake. And while he isn't necessarily known for his expensive toys, a few years ago he spent roughly $12 million for Scotland's 3,300-acre Aberuchill Castle Estate, hunting grounds overlooking a loch.