A handy guide to the oligarchs riding high on Russia's resources boom. They've stormed London and French resorts. Could they be coming to a neighborhood near you? 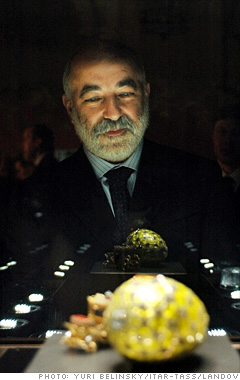 This is one oligarch who isn't afraid to get down and dirty. He built his fortune in aluminum and oil, and he is known for conducting Russia's first hostile takeover in 1994 (through his Renova holding company). He later partnered with fellow oligarch Mikhail Fridman and others to buy oil company TNK, which eventually entered into the infamous fifty-fifty joint venture with BP. In the five years since the merger, the oligarchs have purportedly agitated for more control, and some executives of the venture have quit or fled Russia.

Vekselberg isn't all work and no play. Last year he spent a reported $1 million to bring historic church bells back to Moscow from Harvard University, and in 2004 he made a splashy purchase of nine fabulous Fabergé eggs from the Forbes family, reportedly for roughly $100 million. Though some whisper that his art interests may be more capitalistic than nationalistic, he has said he is dedicated to bringing Russia's "revered treasures" home.
By Nadira A. Hira
NEXT: The playboy
Last updated September 09 2008: 7:52 AM ET
Email | Print |