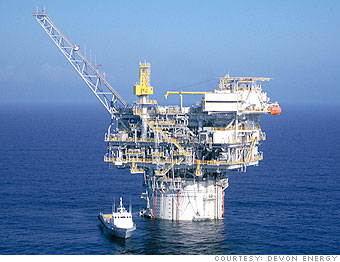 Get quote: DVN
Do you believe oil will remain at under $50 a barrel? We certainly don't. With oil prices collapsing by $100 a barrel in the past six months, a rebound seems inevitable. After all, even if global demand were to remain flat over the next 25 years - the International Energy Agency actually expects it to increase 45% by 2030 - the world would still have to develop new sources of oil and gas equivalent to four Saudi Arabias just to offset the declining outputs at existing oilfields.

But earnings at energy companies are on average expected to drop 16.3% in the next 12 months, according to Standard & Poor's. So the question is how to take advantage of the long-term bargains without your portfolio getting stomped in '09. Devon Energy is one answer. The Oklahoma City-based exploration and production company does business almost exclusively in the U.S. and Canada, so it doesn't have to worry about Russia or some other nation deciding it wants a greater cut of oil profits. Devon's revenues are split between oil and natural gas, giving it an added cushion against oil price drops.

Earnings are expected to drop 36% in 2009. But that's much better than the 53% drop expected at Anadarko Petroleum, Devon's closest competitor. And at a recent $66, the company has a P/E ratio of ten, based on next year's earnings. That's lower than the 12 P/E of Exxon Mobil, which analysts also say is well positioned to weather the energy downturn.