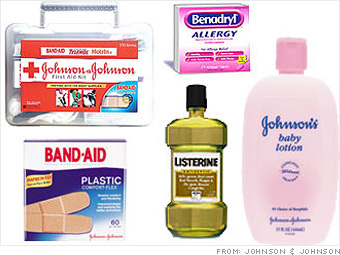 With J&J, investors gain exposure to a leading medical-device maker as well as to blockbuster drugs and top consumer product names such as Neutrogena and Listerine.
Get quote: JNJ
Think of Johnson & Johnson as a comfort stock. Strength and stability seem like cardinal virtues at a time when even the bluest of blue chips - AIG, Citigroup, and Goldman Sachs, to name a few - have suffered calamitous stock declines.

Its triple-A credit rating (J&J is one of only six U.S. corporations with that distinction) means J&J can borrow money at lower cost than its competition. And J&J's fortress-like balance sheet, with $150 million in net cash - $14.8 billion in cash and $14.6 billion in long- and short-term debt - means it can easily complete the $10 billion share-repurchase program it began in 2007 (it has so far bought $7.4 billion in stock), increase its dividend, or swoop in for a cheap, strategic acquisition to boost earnings.

The company has done well despite the current turmoil. In the third quarter, earnings per share jumped by 10.4% over the previous year, and it is growing rapidly overseas. Worldwide sales rose by 6.4% in the quarter, and nearly all of that increase was booked in Latin America and Asia.

A severe economic slowdown in 2009 will put pressure on the consumer segment, and generic drug competition will weigh on pharma. For 2009, earnings per share are expected to grow by 3%, according to research firm CapitalIQ. Pharma will be the biggest albatross as patents expire on blockbuster drugs like Topamax, a migraine and epilepsy treatment.

J&J is trading near its 52-week low at $55, and at a price/earnings ratio of 12. That may seem steep when so many stocks are trading at P/Es of eight or lower. But it's the lowest for J&J since 1979 - the company has averaged a P/E of 22 over the past three decades - and far below its consumer-staples peers. And even with stocks, comfort is worth paying for.