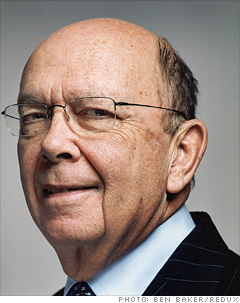 The billionaire chairman of W.L. Ross & Co. specializes in turning around troubled companies.

We are clearly in a serious recession, and more aggressive action is needed to turn things around. The federal government initially underestimated the scale of the mortgage and housing crises and later panicked into an ever-changing series of ad hoc measures that at best dealt with some of the effects of the original crises. But homeowners have now lost $5 trillion, and 12 million families have mortgages in excess of the value of their homes. Therefore the economy will not stabilize until mortgages are adjusted down to the value of homes, with affordable payment schedules, and until new mortgages become available across the home-price spectrum. Till then, the poverty effect of falling house prices and unemployment moving up toward 7% will hold consumer spending back from its former 70% contribution to our economy.

I'm optimistic about the choices that President-elect Obama has made for his economic team, and I've got some suggestions for what they should do. Hopefully the new Treasury Secretary, Tim Geithner, will incentivize lenders to restructure mortgages by guaranteeing half of the reduced principal amount and sharing among the government, homeowners, and lenders any subsequent appreciation. Lenders would gain liquidity by selling the Treasury-guaranteed portion of the loan, and government would receive annual insurance premiums to further protect it against loss. That would cost taxpayers nothing now and probably little or nothing in the future.

Addressing unemployment is paramount. Detroit needs government support in order to implement independently verified concessions from all stakeholders - not just labor - which are sufficiently large to permit profitable operations even if auto sales remain as low as 11 million cars per year. A pre-negotiated bankruptcy may be necessary in order to implement the restructuring, but both the industry and the economy are too fragile to withstand the domino effect that a free-fall bankruptcy would have on a car company, its dealers, and its suppliers.

In addition, to avoid reversal of the 242,000 jobs created by state and local governments in the past 12 months, Washington should provide or guarantee funding for sorely needed infrastructure projects that would create immediate construction jobs and meaningful amounts of permanent jobs.

If President Obama promptly and decisively resolves these problems, whether or not he adopts my recommendations, and restores public confidence, he can end the recession by early 2010. If not, the economy will languish for a long time. Given the economic uncertainty, investors who are too worried to buy equities might consider tax-exempt bonds with yields around 6%, equivalent to almost 10% before federal, state, and local taxes. Investors who want to hedge the risk that federal deficits might lead to longer-term inflation and drive up interest rates, causing these bonds to decline, might buy some TIPS, or Treasury inflation-protected securities, as well. TIPS are U.S. Treasury bonds whose principal amount varies with consumer price indexes to provide holders with a rate of return in constant dollars. TIPS prices currently imply near-term deflation, and that means that they would appreciate in value if inflation comes back.

At my firm, we've been starting to invest in some distressed financial companies. That seems as if it will work out reasonably well, because they're very, very cheap. The financial services sector is kind of where the problems started, and it's probably going to need to be fixed in order for the problems to be resolved. We see opportunities there.