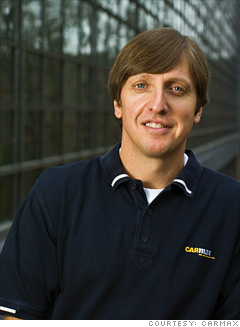 2009 Fortune 500 rank: 311
Last year when CarMax was in expansion mode, Dan Bickett led a team that designed, built, and maintained stores for the used-car retailer. That all changed in December when the company temporarily suspended growth.

As the vice president for construction, design and facilities, Bickett shifted his focus to reducing the company's energy use. Bickett says he's excited about this new direction because it is giving his team time implement energy-saving features into their designs -- something that was hard to do during their rapid-building phase. Plus, energy costs of been cut by 10% to 15% across the board.

"It's the right thing to do, but it really is kind of the gift that keeps giving," he says.

Bickett's 20-member crew, along with other departments and sale associates, standardized the stores' lighting schedules and installed motion and occupancy sensors so all lights don't kick on for a few people coming in at off hours. They also cut back on after-hours lighting in their parking lots. Finally, the team is working with the IT department to enable software to automatically turn off computers.

"We know everything we're doing now is going to go into our next round of growth," Bickett says.