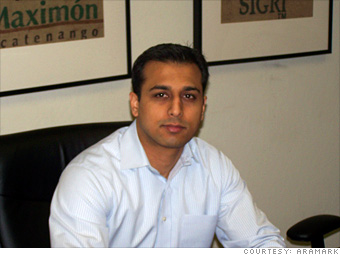 2009 Fortune 500 rank: 198
During a time when companies have little power over the economy's effects on their business, Kumra decided to focus on what he could control: operational costs. As the director of operational excellence and refreshment services at Aramark, he challenged his team to improve service and delivery costs.

First, they installed GPS devices in the delivery trucks. Previously, the service technicians were scheduled and dispatched on a paper basis with drivers deciding on their own routes. But with GPS devices, the technicians' locations are updated every five minutes, allowing dispatchers to send the closest truck when a call comes in.

Kumra also altered the way the division handled water-filter maintenance, asking technicians to change the filters along their daily routes. The result: overtime reduced by 44%, fuel consumption by 18%, and increased filter revenue by 38%.

"Productivity just shot up dramatically," he says. "It was a very nice thing for us to have last year."

NEXT: Christine Pirog - Bed Bath & Beyond