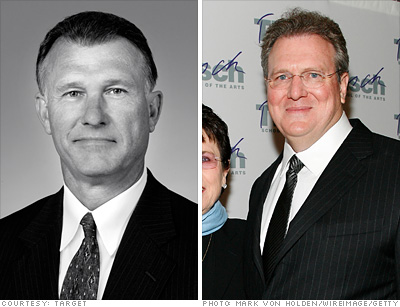 For Target: Richard Kovacevich, chairman, Wells Fargo & Co. The bank is both the largest real-estate lender and one of the largest credit-card issuers in the U.S. Kovacevich was CEO until 2007.

VS: Richard Vague (far right), CEO and co-founder, Energy Plus Holdings., and former founder and CEO, First USA (the largest Visa issuer until it was sold to JP Morgan Chase in 1997). Believes that there is an inherent conflict when a retailer owns a credit business because retailers want to extend credit to boost sales, while at the same time they want to restrict credit to people who can pay.