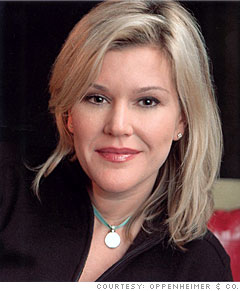 CEO and founder
Meredith Whitney Advisory Group
2008 rank: 35
Age: 39
The former Oppenheimer analyst's spot-on calls during the meltdown gave her the prominence to start her own firm. The normally bearish Whitney's July upgrade of Goldman Sachs jump-started a bank-stock-led rally. She was also the only Wall Street analyst at the Fed's much-watched Jackson Hole summit.