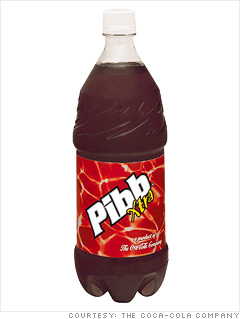 The soda was launched in the 1970s as Coke's answer to Dr. Pepper, the largest player in the "pepper flavored" category.

In 1992 it faced a lawsuit after changing its packaging to what Dr. Pepper said was too similar to its own. Coca-Cola also engaged in a heated turf war against Dr. Pepper at McDonald's soda fountains.

Renamed "Pibb Xtra" in 2001, the brand sold 57 million cases in the U.S. last year, according to Beverage Digest. But that's nothing compared with Dr. Pepper's 586 million.