Michael Lind: The plan is doomed 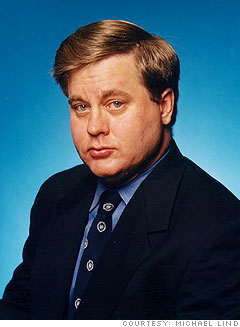 The administration wants a macro-prudential regulator who will have the authority to intervene in the whole banking sector. I think this is doomed.

Unlike the high civil service culture they have in Australia or Canada, where regulators oversee a handful of large banks, we have bureaucrats who are despised in public culture and viewed as inferior to people making money, so they aspire to use their positions to move in that direction. In the U.S., discretionary regulation tends to be corrupted.

I want structural separation between retail banking and casino banking, where retail money couldn't be used to finance the proprietary trading. Or public banking, perhaps through the postal system, to create new retail-only institutions.

It's a philosophical question: Is credit a public utility, or is it an asset? Adam Smith believed that banking should be organized similarly to infrastructure industries. If it was good enough for Smith, it's good enough for me.