NASA has put up $4 million in prizes for inventors who create the building blocks for an aerospace breakthrough. Meet 4 teams competing in this year's Space Elevator Games. 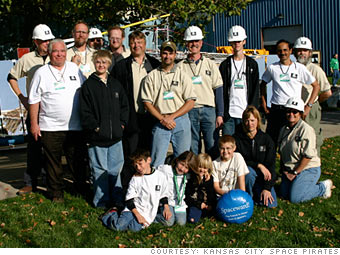 Brian Turner, 40, was turned on to the Space Elevator Games in late 2005 after reading an article about that year's winner-less power beaming challenge. The beaming challenge, one half of the Games' $4 million competition, only pays out if a team meets the contest's goal -- which has not happened in any of the three prior competitions. That brought out the competitive streak in Turner, a self-employed computer programmer and robotics hobbyist.

"Back then, I had no idea how big this would become," he says. He's invested about $50,000 of his own money into the project, as well as countless evenings and weekends.

Over the years, Turner has recruited dozens of volunteers -- including his father, stepfather, brother and great uncle -- to join the Kansas City Space Pirates. Their quest: Build a remotely powered robotic vehicle that can climb a predetermined length up a cable. Turner's mother, a licensed airplane mechanic, is acting as an advisor to the 10-person team.

One of the Space Pirates' biggest breakthroughs came in 2006 when they realized they could use a vast bank of mirrors to direct the sun's rays onto the robotic vehicle's solar panels, which would then power its motor. That technology earned them second place, behind the well-funded University of Saskatchewan Space Design Team (USST) in 2007, the last time the Games were held.

This year's competition requires the robotic vehicle to climb 1 kilometer up a cable -- much higher than the 2007 goal and too high to be powered by the sun's reflected rays alone. So the Space Pirates have spent the last two years redesigning their system to be powered using a laser beam.

Turner's confident that after all their preparation, the Space Pirates will be able to achieve this year's goal of climbing the full 1 kilometer of cable at a minimum speed of 2 meters per second.

"I'm pretty close to being as ready as I can be," he says. "After three and a half years, you kind of want closure and to move on to something else."