Can big bike makers bounce back?

A glamorous business in good times, the market for these big bikes has continued to shrink, driving industry leaders to revise their motorcycle game plan. Here's a selection of what's hitting the showrooms.

Do cruisers have a future? 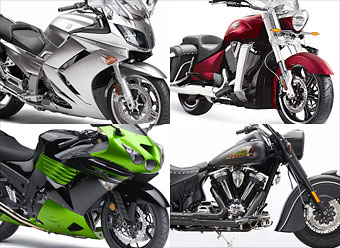 There has been much talk lately about how sales of luxury goods are leading the rest of the U.S. economy out of the recession. The rich, it seems, still have money to spend on trophy houses and fancy cars. But how about the luxury products that the average person might aspire to, like a motor home or fishing boat?

Case in point: cruiser motorcycles. A glamorous business in good times, the market for these big bikes, also known as heavyweights and tourers, continues to shrink.

The downturn has caused market leader Harley-Davidson and the Japanese Four (Honda, Yamaha, Suzuki, Kawasaki) to rethink their strategies. And niche manufacturers of high-end bikes who blossomed during the boom (Victory, Triumph, Star, Indian) are trying to plumb the depths of the new normal.

Apart from their fate in the showroom, big motorcycles are fascinating industrial objects that stir primal urgings for freedom and individuality. Here's a selection from the major manufacturers.