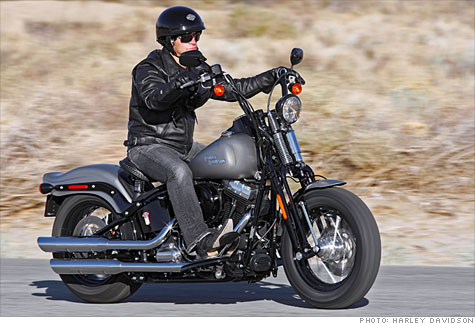 FORTUNE -- Harley-Davidson was the feel-good turnaround story of the 1990s and then the poster-boy for brand values in the 2000s. How often did you read that Harley was the only consumer brand whose customers were so loyal they wore the company's logo tattooed on their chest?

But after expanding exuberantly in the last decade, Harley has fallen on hard times. Now it is struggling against a foe that not even cost-cutting nor brand loyalty can overcome: demographics. Its current owners are getting old, and not enough younger ones are coming up behind them.

Harley's core customer is a middle-aged white American male, a group that will contract in the coming decade. As one blogger wrote, "The 60-70-year old riders have trouble lifting a leg over the seat because of arthritis. And finger joints hurt with the cold air and engine vibration." Women represent just 11% of Harley buyers, and penetration in the African-American and Hispanic markets is similarly limited.

Harley's need to readjust its aspirations was driven home this week by the news that the company had forced its Wisconsin labor unions to accept wage and benefit concessions by threatening to move its factories out of the state. New contracts will allow the company to cut 325 employees and convert 150 to 250 other workers to temporary or "casual" status, meaning they have fewer benefits and will work on an "as-needed basis.

The cutbacks come as Harley (HOG, Fortune 500) scales back in the face of a sharply shrinking market. As recently as 2008, Harley built 303,000 motorcycles, nearly double the 159,000 it assembled in 2000. This year it expects to make between 201,000 and 210,000 bikes. Since new CEO Keith Wandell arrived on the scene in May, 2009, Harley has consolidated operations, terminated its Buell line of sport bikes, and sold its MV Agusta Italian motorcycles back to its founder.

Bumpy roads are nothing new for Harley. The first Harley-Davidson was built in Milwaukee -- still the company's headquarters -- in 1903 by William S. Harley and the three Davidson brothers. Their popularity took off during World War One, when 20,000 Harleys were used by the U.S. infantry. With the shutdown of Indian in 1953, Harley became the only American motorcycle manufacturer. Marlon Brando's 1954 movie The Wild One helped solidify Harley's image of hairy-chested rebellion, an identification it alternately embraces and spurns.

By 1969, Harley enjoyed an 80% share of the market for big bikes. But ten years later, incursions by Japanese manufacturers, led by Honda, squeezed its share to 20%. Fighting back at what it perceived as unfair competition, the company won an anti-dumping ruling from the International Trade Commission in 1982, and President Reagan imposed a 45% additional tariff on super heavyweight Japanese bikes.

Given an opening, Harley used the opportunity provided by the tariffs to regroup. It paid more attention to the appearance of its bikes, started to focus on quality, and beefed up its marketing. From 1988 to 1995, annual shipments doubled. In fact, demand grew faster than manufacturing capacity could keep up. Harleys became a cult item; Harley dealers packed extra charges onto list prices and compiled waiting lists for prospective customers. By the late 1990s, certain models were back-ordered for two years.

After resisting the temptation to expand, Harley belatedly added production capacity and grandiosely predicted sales would reach 400,000 by 2007. But lacking scarcity, Harleys also began to lose their cachet. Sales peaked in 2006 at 349,000. Nobody bought Harleys for transportation, and at up to $20,000 for a fully-rigged cruiser, they had become a highly-deferrable luxury purchase, especially in a recession.

Nor did Harley's famous brand strength buffer it when its bikes were no longer in short supply and demand hit a wall. The combination of a faltering economy and an aging customer base at the end of the decade had significantly dented sales -- perhaps permanently.

There is a lesson here for companies that become the flavor of the moment -- and then use that as a base from which to make forecasts for the future. Harley's famous brand couldn't buffer it from the downturn once owning a Harley stopped being cool. Tattoos didn't move motorcycles.

As analyst Craig Kennison of Robert W. Baird points out, Harley survived earlier economic downturns when other discretionary consumer durables slumped because Harleys were in short supply. As it built capacity to meet demand, Harley became just another manufacturer, vulnerable to a cyclical economy. In the fourth quarter of 2009, it suffered its first quarterly loss in 16 years.

The days when Harleys were a fashion accessory are likely over. Except perhaps for Indiana governor and presidential aspirant Mitch Daniels, it is no longer big news when a celebrity is seen riding a Fat Boy or Ultra Limited. The challenge for Harley-Davidson in 2010 is to adjust to the new normal.