Look for a greener pasture 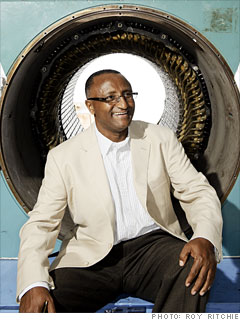 The engineer switched from a shrinking domestic industry, automaking, to a growing global one: wind power.

Growing up on a farm in Ethiopia, Daniel Gizaw had no choice but to get by on his own ingenuity. If his father's tractor broke, they had to fix it themselves. That led to studies in electrical engineering in Poland and Germany, and immigration to the U.S. in the 1980s.

"My forte is finding solutions to the worst problems," Gizaw says.

General Motors saw that quality when the automaker recruited Gizaw to develop its first electric car, the EV1 vehicle, which hit the road briefly in the 1990s.

Gizaw figured he could innovate better outside a giant company, so he recruited two colleagues and founded Danotek to build superefficient wind turbines.

Gizaw's advice to workers downsized by Detroit's woes: "Don't limit yourself to the sector you're in. Look into growing industries and ask, 'What can I offer?'"