It's been a tough year so far, but U.S. automakers have weathered the storm remarkably well. As for the rest...

A big year for autos 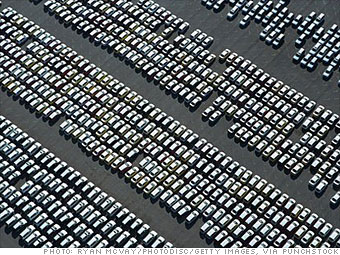 2011 has already been an unusually eventful year for auto sales.

There is economic uncertainty every year, but this year it seems to be especially virulent. New concern about the U.S. budget deficit and government debt pushed Congress to the brink; uprisings in the Middle East helped push the cost of gold to an all-time high; and growing prices of commodities raised anew the specter of inflation.

Meanwhile the Japan earthquake and tsunami have interrupted supply lines and played havoc with production by both Japanese and American automakers. What's worse is that nobody seems to have their arms around the issues, and problems keep spreading. Because of parts shortages, both Honda and Toyota are cutting production in the U.S.

On top of all that, steadily rising gasoline prices have renewed interest in small cars with alternative powertrains. According to one back-of-the envelope calculation by a Detroit Three executive, the market share for subcompact and compact cars has risen to 25% from the high teens, and the Toyota Prius is once again in short supply.

With three months gone in the calendar year -- and six months in the model year -- it is not too soon to start projecting the winners and losers for 2011.

By Alex Taylor III, senior editor at large
NEXT: Winner: The U.S. car market
Last updated April 11 2011: 9:23 AM ET
More from Fortune
Why can't U.S. automakers build a good small car?
Proficient as they are with pickups and SUVs, the Detroit Three have suffered from a long history of small car failures. This year, they are trying a new way. More
GM vs. Ford: The hundred-year war
It's a rivalry that's been going strong since 1908, and the pitched battle for market share shows no sign of letting up. More
Japan's automakers: Down but not out
The disaster will create short-term shortages, anomalies, and discontinuities. But Japanese automakers have been tested by catastrophe before and successfully recovered. More
Find Your Next Car