The aftermath of the burst housing bubble continues to hit Freddie Mac and Fannie Mae -- they're the two worst Fortune 500 money losers for the second year in a row. Who else lost big bucks? 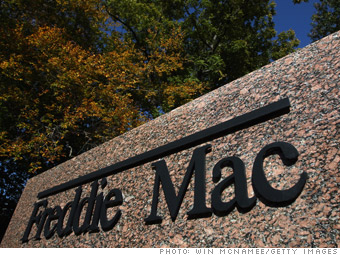 First, some trivia: Freddie Mac's losses the past three years were among the 20 worst annual losses any Fortune 500 company has suffered since the list began.

For Freddie, which was taken over by the government during the financial crisis along with its big sister Fannie Mae, much of its $14 billion loss in 2010 stemmed from $17.2 billion in provisions for losses on bad mortgages. The company was also burdened by the $6.4 billion in annual dividends it had to pay on senior preferred stock owned by the government. Freddie ended the year asking for an additional $500 million in aid.

Freddie may not have that many more opportunities to make this list; if the government has its way, the two mortgage giants will eventually be dismantled.