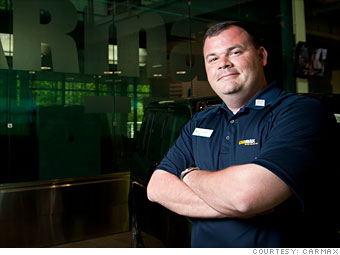 Buying a car for yourself or your family is stressful enough. Imagine buying cars for over 100 used-car superstores across the country.

That's Chris Updike's job. He's a senior buyer with CarMax, where he spends most of his time researching the vehicles that CarMax needs to buy at massive automobile auctions."We're buying a product that fluctuates in price and popularity on a monthly, weekly, sometimes daily basis," Updike says. That means he has to keep tabs on inventories at all of CarMax's lots in addition to keeping up on the auto industry as a whole.

"We really have to create a plan of attack for auction day," he says, because auction day is nuts. Buyers such as Updike spend the day before the auction assessing up to 1,200 cars.

When the auction starts, Updike and other buyers run back and forth between as many as 20 lanes of cars, checking for any clues that a vehicle might not be CarMax quality. "We have to look at a car and make a determination on whether or not it makes standard in 30-45 seconds."

Updike says that all CarMax employees go through eight months of training so they can make these quick calls. "There's no mathematical formula for buying and selling cars," he says. Buyers have to know when it's best to throw in the towel on bids that have gone too high, Updike says, or that perfect second-hand car on the other side of the lot could be going, going, gone.