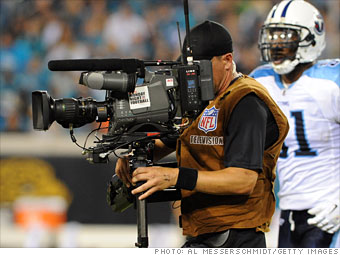 Annually, the NFL redistributes upwards of $4 billion in radio, TV and digital earnings across its 32 teams -- $125 million a piece, plus an equal share for the league -- and that number shows no sign of declining. The 19 highest-rated fall TV programs (and 28 of the top 30) were NFL games, and this year's Super Bowl was the most-watched program ever.

NEXT: Sponsorships: stadiums
Last updated March 09 2011: 12:45 PM ET
More from Fortune
The biggest losers in an NFL lockout? Everyone.
Who loses first, and worst, if a dreaded NFL lockout really happens? Rookies (sorry, Cam Newton), advertisers, marketers, and maybe the networks. No one is safe. More
Tiger, Peyton and 10 more star clients of IMG
IMG head Ted Forstmann may have made some bad bets (one of the biggest was on IMG's own client), but his company's golden reputation as a sports, modeling, and entertainment agency he resurrected will continue. Here are 12 reasons why. More
Steve Young: From the NFL to private equity
The private equity world is littered with folks who are famous for doing something else. Bono at Elevation Partners. Bill Frist at Cressey & Co. Mike Richter at Environmental Capital Partners. Colin Powell at Kleiner Perkins. More