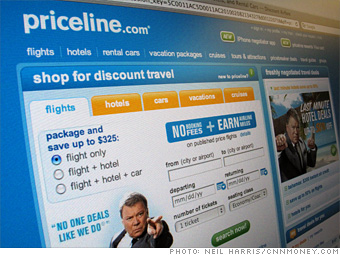 The discount travel broker, famous for its "name your own price" deals, lately seems to able to name its own sales. Priceline.com-beamed to the forefront of America's consciousness by its spokesman, Star Trek veteran William Shatner-saw travel bookings grow at warp speed: 47% in 2010. Those gains were boosted by the company's acquisition of U.K. rental car company TravelJigsaw, which was touted as the fastest-growing online car rental agency in the world.

Priceline's two other international acquisitions-Europe's largest hotel reservation service, Booking.com, and Asia's hotel online reservation service, Agoda-also helped it along. Overseas business accounted for roughly 69% of the company's gross bookings last year, and 82% of its operating income. That's a trend that the company thinks is here to stay as Internet penetration and international travel grows in other parts of the world, Priceline wants be there.
Get stock quote: PCLN
Revenue ($ millions): $3309.8
Net Income ($ millions): $578.5
Industry: Technology

L. Michael Cacace, Douglas G. Elam, Betsy Feldman, Kathleen Smyth, and Anne Vandermey, with Josh Dawsey, Mina Kimes, and Sam Silverman
Network with priceline.com
What businesses do you think are primed to grow in this economy?
From the September 26, 2011 issue.
Revenue and profit figures reflect the four quarters ended on or before April 30,2011.
Total return is through June 30, 2011.
Top 3
See the rest
See the rest
See the rest
How we pick the Fastest-Growing
To qualify, a company -- domestic or foreign -- must be trading on a major U.S. stock exchange; file quarterly reports to the SEC; have a minimum market... More