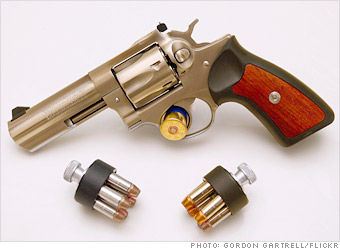 The firearm manufacturer delivered a bang-up second quarter, easily beating analysts' estimates: Sales increased 23% compared to the same quarter in 2010 and profits shot up 33%. Two new pistols accounted for a third of sales in that period, according to the company. In May, it announced the a "million gun challenge," in which Ruger promised to donate $1 to the National Rifle Association for every Ruger weapon sold from April 2011 to March 2012. The goal: Selling one million guns. Ruger appears on track more than on pace to hit its target. In July, the company says, it contributed $279,600 to the NRA.
Get stock quote: RGR
Revenue ($ millions): $262.4
Net Income ($ millions): $27.9
Industry: Industrial

L. Michael Cacace, Douglas G. Elam, Betsy Feldman, Kathleen Smyth, and Anne Vandermey, with Josh Dawsey, Mina Kimes, and Sam Silverman
Network with Sturm Ruger & Co
What businesses do you think are primed to grow in this economy?
From the September 26, 2011 issue.
Revenue and profit figures reflect the four quarters ended on or before April 30,2011.
Total return is through June 30, 2011.
Top 3
See the rest
See the rest
See the rest
How we pick the Fastest-Growing
To qualify, a company -- domestic or foreign -- must be trading on a major U.S. stock exchange; file quarterly reports to the SEC; have a minimum market... More