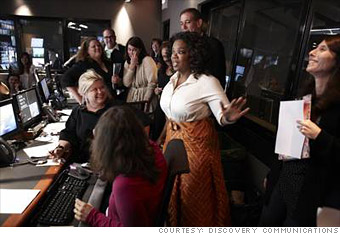 Shark Week, Storm Chasers, and the Casey Anthony trial-all have been media phenomena, and all could be seen on Discovery Communications's constellation of cable channels, including Discovery Channel, Investigation Discovery, TLC, and Animal Planet. With programming in 38 languages, Discovery's non-U.S. advertising revenue increased 25% in the second quarter, while affiliate revenues-payments made to Discovery's networks by cable and satellite-TV providers-rose 18%. For the year, analysts expect earnings to jump 32%.

Discovery continues to improve its operations. Programs on the Discovery Channel, Animal Planet and others of its channels scored 11 Emmy nominations in July. And in February, Discovery launched 3net, the first 3D television network in the U.S. You can expect Shark Week and Storm Chasers to be especially vivid this year.
Get stock quote: DISCA
Revenue ($ millions): $3855
Net Income ($ millions): $788
Industry: Entertainment

L. Michael Cacace, Douglas G. Elam, Betsy Feldman, Kathleen Smyth, and Anne Vandermey, with Josh Dawsey, Mina Kimes, and Sam Silverman
Network with Discovery Communications
What businesses do you think are primed to grow in this economy?
From the September 26, 2011 issue.
Revenue and profit figures reflect the four quarters ended on or before April 30,2011.
Total return is through June 30, 2011.
Top 3
See the rest
See the rest
See the rest
How we pick the Fastest-Growing
To qualify, a company -- domestic or foreign -- must be trading on a major U.S. stock exchange; file quarterly reports to the SEC; have a minimum market... More