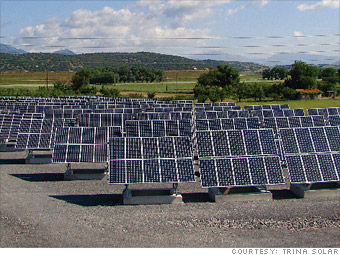 Despite a bumpy 2011, Trina Solar has increased its profits nearly 20-fold to $584 million in 2010. The Chinese solar company has made a name for itself with low-cost technology and global reach. Though its dependence on the whims of government subsidies and institutional demand for greener energy pose some risk, the company still sees big room for growth, including in Japan, Australia, India and the Middle East.

Trina is also fighting for share in the U.S. market. Earlier this summer the company made a move to ramp up its American name recognition, becoming a sponsor of car racer and actor Patrick Dempsey, and establishing a joint solar charity initiative.
Get stock quote: TSL
Revenue ($ millions): $2071.7
Net Income ($ millions): $314.6
Industry: Energy

L. Michael Cacace, Douglas G. Elam, Betsy Feldman, Kathleen Smyth, and Anne Vandermey, with Josh Dawsey, Mina Kimes, and Sam Silverman
Network with Trina Solar
What businesses do you think are primed to grow in this economy?
From the September 26, 2011 issue.
Revenue and profit figures reflect the four quarters ended on or before April 30,2011.
Total return is through June 30, 2011.
Top 3
See the rest
See the rest
See the rest
How we pick the Fastest-Growing
To qualify, a company -- domestic or foreign -- must be trading on a major U.S. stock exchange; file quarterly reports to the SEC; have a minimum market... More