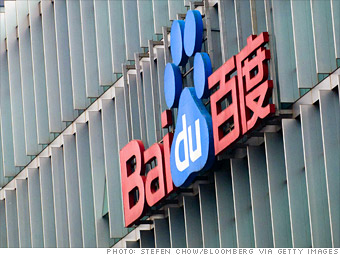 Baidu holds 84% of the Internet search market share (by query) in China, with its next closest competitor, Google, clutching a mere 8%, according to iResearch. But like Google in the U.S., China's largest search engine is not content with being just that. In under a year, it also invested $306 million in a travel search engine, launched its own browser and partnered with Microsoft's Bing. Social networking is on the horizon for Baidu, which nearly doubled its revenue in 2010, and it has created Qiyi.com, an Internet TV platform.

Baidu recently resolved a legal headache: Its search function had been accused of abetting music pirating. But in July, it announced a partnership with Universal Music, Warner Music and Sony Music to distribute their songs through Baidu's MP3 service. Separately, it launched ting!, a service that distributes music for free.
Get stock quote: BIDU
Revenue ($ millions): $1363.8
Net Income ($ millions): $619.7
Industry: Technology

L. Michael Cacace, Douglas G. Elam, Betsy Feldman, Kathleen Smyth, and Anne Vandermey, with Josh Dawsey, Mina Kimes, and Sam Silverman
Network with Baidu
What businesses do you think are primed to grow in this economy?
From the September 26, 2011 issue.
Revenue and profit figures reflect the four quarters ended on or before April 30,2011.
Total return is through June 30, 2011.
Top 3
See the rest
See the rest
See the rest
How we pick the Fastest-Growing
To qualify, a company -- domestic or foreign -- must be trading on a major U.S. stock exchange; file quarterly reports to the SEC; have a minimum market... More