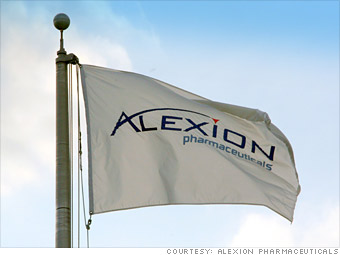 The company's first product to reach the market, Soliris-which treats a rare, but life-threatening disease that basically destroys red blood cells-has been a success. Sales rose about 50% in the most recent quarter compared to the equivalent period in 2010. Soliris is the only drug treating the blood disease, which is called paroxysmal nocturnal hemoglobinuria, and Alexion is now exploring other uses for its compound in the hopes of expanding the market for the medication.

By Betsy Feldman and Anne VanderMey with Josh Dawsey and Sam Silverman
Network with Alexion Pharmaceuticals
What businesses do you think are primed to grow in this economy?
From the September 26, 2011 issue.
Revenue and profit figures reflect the four quarters ended on or before April 30,2011.
Total return is through June 30, 2011.
Top 3
See the rest
See the rest
See the rest
How we pick the Fastest-Growing
To qualify, a company -- domestic or foreign -- must be trading on a major U.S. stock exchange; file quarterly reports to the SEC; have a minimum market... More