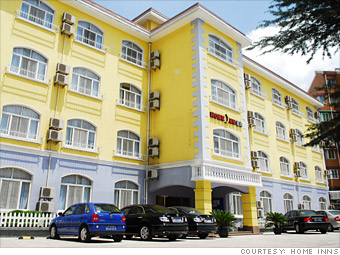 Tourism is blossoming in China, so it's no surprise that this Chinese budget-hotel chain has been growing, too. Revenues for the company increased nearly 22% in 2010; in its most recent quarter, that figure was 12% higher than in the same quarter last year. Home Inns plans to expand from 934 hotels as of June 30 to about 1,100 by the end of 2011, some of which will come from the acquisition of another economy hotel operator, Motel 168.

Home Inns is also diversifying into higher-end lodging categories. In November, it partnered with Yitel, a midscale Chinese hotel operator. And over the next five years, it plans to open 50 new facilities to accommodate the growing demand for finer establishments.
Get stock quote: HMIN
Revenue ($ millions): $464.6
Net Income ($ millions): $51.6
Industry: Hotels

L. Michael Cacace, Douglas G. Elam, Betsy Feldman, Kathleen Smyth, and Anne Vandermey, with Josh Dawsey, Mina Kimes, and Sam Silverman
Network with Home Inns & Hotel Management
What businesses do you think are primed to grow in this economy?
From the September 26, 2011 issue.
Revenue and profit figures reflect the four quarters ended on or before April 30,2011.
Total return is through June 30, 2011.
Top 3
See the rest
See the rest
See the rest
How we pick the Fastest-Growing
To qualify, a company -- domestic or foreign -- must be trading on a major U.S. stock exchange; file quarterly reports to the SEC; have a minimum market... More