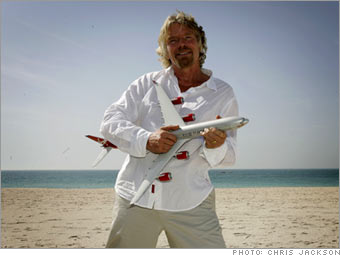 Richard Branson
Founder and Chairman, Virgin Group
Learn How to Say No (Even if You're Known as "Dr. Yes")
I turn people down with extreme difficulty sometimes, because the people I'm saying no to are people I don't want to discourage. And it should be difficult. Saying no shouldn't be an easy thing to do, and you have to be good at it. I often used to dodge doing it myself, and hide behind other people and delegate it, but if you're the boss, that isn't the right thing to do.

I remember when I was a 15-year-old asking Vanessa Redgrave or James Baldwin for an interview, and the fact that they took the time to respond meant an enormous amount to me. It inspired me. So it's extremely important to respond to people, and to give them encouragement if you're a leader. And if you're actually turning people down, if you must say no, whether it's for a job or a promotion or an idea they're proposing to you, take the time to do it yourself.

I met two big San Francisco entrepreneurs recently, and they said they get e-mail like this too, but they just dump it all in the dustbin. They don't try to answer at all. I asked them why, and they said, "The time we spend responding could be used to create something of value for our business." That may well be pragmatically right, but I still think it's morally wrong, and I suspect that anything that is morally wrong is ultimately bad for business.

What do you think it will take in 2007 to succeed in business? E-mail the editors here.
More
How to make a comeback