The hot social network is fine for kids, but skeptical adults need a reason to sign up. One turns out to be getting good stuff in your News Feed. 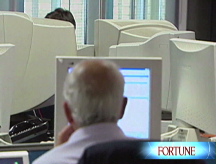 NEW YORK (Fortune) -- Facebook, the 71-million-member social network, has attracted lots of adults during the last year as it became a global technology cause celebre. But I'm hearing more and more of these grown-up newbies questioning whether the service is really worth their time. Some find it more annoying than useful, and can't really figure out any benefit.

Even some tech cognoscenti, many of whom are active and engaged Facebook users, are souring on the service. Caterina Fake, co-founder of Flickr and now an executive at Yahoo (YHOO, Fortune 500), told me the other day that she has put her Facebook profile in mothballs and stopped using it entirely.

I remain convinced there are significant benefits to be found in making Facebook a central part of one's online life - but appreciate that for many it will take time before those benefits become obvious.

For some, it might be a case of waiting for Facebook's already good features to get even better. Improving Facebook for grown-ups will be a huge priority for Sheryl Sandberg, who recently took over as Facebook's number two. (My Fortune colleague Jessi Hempel recently wrote a terrific and extensive profile of Sandberg).

In general, adults need to convince friends to join at the same time in order to appreciate Facebook's pleasures. Unlike the students for whom the service was originally designed, adults don't enter it with a pre-baked group of acquaintances and friends. Facebook CEO Mark Zuckerberg calls that set of connections a user's "social graph," and establishing it inside the service is critical for Facebook to have value.

Facebook started by automatically connecting students to all the other students at their school. Most adults, by contrast, join Facebook one by one, and have to assemble their new Facebook online relationships by sending invitations to friends by e-mail. Facebook provides tools to help, but it takes time.

Yet the service doesn't become very interesting until you have enough friends inside it so that each time you visit there is new and engaging information about them for you to see.

Facebook is different from the many social networks that preceded it for two primary reasons. First, it requires you to join under your real name and use real information about where you live and work, what your interests are, and so on.

But the second, less-understood differentiator in today's Facebook is a feature called the News Feed. You see your individualized News Feed each time you log in. Getting it to work for you is key for an adult to have a satisfying Facebook experience, and has everything to do with having enough friends.

The News Feed is a list of "news" about your friends' activities and behavior. One friend may have joined a group protesting the Zimbabwe election count delay. Another has become friends with someone else you know. One has posted photos of his trip to Spain. Someone has become a "fan" of The New Yorker magazine. A friend is attending a party on Saturday night. And so on. Some of these "news" alerts may impel you to click on them to look at the photos, or learn more about a group, a party, or some other aspect of your friend's activities. This is the launching point for much of a typical member's Facebook activity.

What makes the Facebook News Feed unlike any other communications tool that preceded it is that none of these friends explicitly said they wanted you to get this information. Instead, it came to you because Facebook's software has concluded, by sophisticated algorithmic means, that you are likely to be interested.

For the News Feed to work properly though, you need to have a fair number of Facebook friends and you need to regularly do things inside Facebook. And it is on that score that many adults fall down.

The News Feed's actual mechanics are opaque. The company has never explained how it works in detail. But you can assume, for example, that it probably takes into consideration things like people's profiles you have recently looked at. You'll probably see more News Feed items for that person than for someone you have ignored. Similarly, I suspect you will see more News Feed stories about people with whom you've exchanged messages inside Facebook. You can also explicitly tell Facebook to give you more news about certain of your friends.

The News Feed remains nascent and primitive. But it should get better and better at figuring out what people really want to see and click on. That is a critical company priority. Facebook only launched the News Feed in the Fall of 2006 (to tremendous protests from members, who initially feared it would intrude on their privacy by broadcasting their behavior).

I estimate you need between 50 and 75 friends before you achieve the critical mass that allows you to begin enjoying Facebook and getting useful and interesting News Feed messages. I now have 478 friends, and there's a heck of a lot in my News Feed.

Granted, today's Facebook social frenzy is an acquired taste. Some adults may simply find it not worth the bother, News Feed or not. But I think many adults - especially those who like staying connected to other people and enjoy trying new things - have everything to gain by diving in.