Huge writedowns at Delta and Northwest, and liquidity worries at United, show the industry is in trouble yet again. 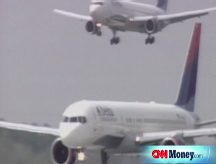 When Delta (DAL, Fortune 500) and Northwest (NWA, Fortune 500) last week hatched their plans for a $3 billion merger, Delta chief Richard Anderson promised that the airlines were "announcing a transaction that is about addition, not subtraction, and combines end-to-end networks that open a world of opportunities for our customers and employees."

Staggering surge in fuel prices. But the airline industry's opportunities appear to be rapidly narrowing as the price of crude oil hits new highs. The price of oil has soared some 70% since Labor Day, saddling airlines with massive cost increases at a time when they have little power to raise prices due to heavy competition and a soft economy.

The airlines have responded by pledging further cost cuts, and investors expect to see more deals along the lines of the Delta-Northwest pairing as companies seek refuge in overhead-reducing mergers. Still, Delta's Anderson warned this week that he may have to raise ticket prices by 15%-20% - an uncomfortable prospect for an industry in which rivals compete for every fare. "An airline ticket has got to reflect the full cost of fuel," he told reporters Tuesday.

Anderson isn't the only one seeing the need for more rational pricing of airline tickets. UAL (UAUA, Fortune 500) finance chief Jake Brace made similar comments Tuesday, after the Chicago-based carrier posted a first-quarter loss of $537 million, or $4.45 a share. "This is not a United issue, this is an industry issue," Brace said. "This industry needs to recover the commodity cost that it pays."

Raising prices is no panacea. The problem is that by raising prices, the airlines stand to reduce demand for their tickets - so a 15% rise in ticket prices might not result in a 15% revenue gain. UAL has said it would retire more planes and cut 1,100 jobs in a bid to reduce capacity and cut costs. But those moves alone won't cover the gap, either. As a result, UAL continues to consider moves like selling stakes in its airplane-maintenance and frequent-flier miles businesses to investors.

UAL has also made some moves that, while they may not be popular with customers, are at least mitigating the effect of fuel-price increases - and are generating me-too responses among other carriers. "We will continue to build on this work charging customers for services they use and products they value while rewarding our best customers for their business and their loyalty," CEO Glenn Tilton said on Tuesday's conference call. "An example is the $25 fee for a second bag that we initiated, which we expect will generate over $175 million annually for United."

Taking another trip down bankruptcy lane? While UAL considers new revenue generators and additional restructurings - the company emerged from a painful trip through Chapter 11 bankruptcy just two years ago - investors are starting to worry about the airline's financial position. UAL shares lost more than a third of their value in trading Tuesday in a scenario that has become all too familiar to investors in the financial services sector: UAL was forced to deny marketplace rumors that was in danger of running out of cash. UAL execs spelled out on Tuesday's conference call that they're not in any danger on that front.

Brace said the company has $3 billion in high-quality collateral that it could pledge should it need to do any additional borrowing, and stressed that UAL is comfortably in compliance with lending covenants that specify how much cash the company holds and interest it pays.

Yet even his efforts to reassure analysts pointed to the strains on the industry. Brace said that with the recent spike in fuel prices and the softening economy, the company is under increasing financial pressure. "It's really very difficult to predict whether we will have an issue or not because, you know, we're taking these actions to try and combat the higher fuel costs and have to see what the effects of those actions are," he said.

With several of the major airline stocks already having lost more than half their value in 2008, it's clear that investors aren't holding their breath for a speedy recovery.