The fertile new field of biomimicry is helping to lower energy use and speed innovation. The Lotus leaf led to a self-cleaning paint.

By David Kirkpatrick, senior editor
Sign up for the Fast Forward e-mail newsletter
The future of U.S. energy 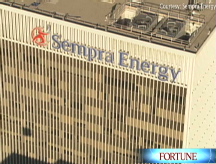 NEW YORK (Fortune) -- I'm sitting at a dinner table at Fortune's just-completed Brainstorm Green conference in Pasadena. Janine Benyus, the high priest of a new field called biomimicry, has drawn a little sketch of a car on a napkin. "Abalone," she writes, and draws an arrow to the windshield. "Tree frog" and an arrow toward the tires. "Lotus leaf" she connects to the side of the car. She's telling me about the many ways car designers are borrowing concepts from nature.

The lotus, it turns out, has a unique way of causing water to bead and run off that can be applied to create self-cleaning coatings for cars (as well as paint, glass, cement and roofing tiles). "And Volvo has a collision avoidance system that's based partly on studying how locusts can swarm without colliding," she adds.

Benyus coined the term "biomimicry" in a book she published a decade ago. But the field she helped coalesce is taking flight now.

To a riveted crowd at Brainstorm Green she described how companies are learning to innovate by taking advantage of what she calls "evolutionarily-designed technologies" - in other words, ideas that already exist in nature. She consults through her firm The Biomimicry Guild.

"Organisms have had 3.8 billion years to perfect this stuff," she says, noting that there are about 30 million species to observe as we seek to solve the ever-more-complex problems a warming and crowded earth presents to our own species.

Benyus has many examples of emerging innovations. A swimsuit introduced by Speedo in 2000 and refined since then has led to scores of world records. Its surface mimics the "denticles" on a shark's skin, reducing drag. "Swimmers feel like they're swimming downhill!" marvels the excitable Benyus.

The shark not only inspired Speedo's swimsuit, but its tail motion inspired a machine that harvests wave energy at sea. In addition, she says companies are figuring out how to use the shark's thermoelectric ability to convert differences in temperature into electric signals. And others are trying to understand why sharks have almost no incidence of cancer.

A material that mimics the skin of a fish that swims through sand may, she says, lead to a material so slippery it could replace ball bearings. A company called Pax Scientific has designed fans inspired by the shapes of fiddlehead ferns and the inside of conch shells. Benyus says they "entrain" the air to push it with less friction and greater energy efficiency than conventional fans.

The Japanese bullet train's engine was redesigned based on the beak of a Kingfisher bird, enabling a 10% speed increase even as energy consumption declined 15%. Watching honeybees "dance" led to insights that enable data centers to better allocate computer server time. A company called Konarka is making solar cells based on the techniques of plant photosynthesis.

The potential for future breakthroughs in many fields appears bright for those designers willing to study nature's examples. For example, Benyus says we can learn about insulation by studying how electric eels avoid shocking themselves. One company is studying how mollusks use CO2 in their shells, with an eye to turn that perfidious carbon in our atmosphere into benign building materials. A Namibian beetle may offer ideas for generating water in dry climates. It can literally pull water out of fog, Benyus says, with a special surface on its wing.

In addition to consulting, Benyus has created the nonprofit Biomimicry Institute to build a global catalog of biological functions from which innovators can pick and choose. How does nature capture CO2? Insulate? Reduce Friction? Seal Leaks? Quiet noise? Manage Moisture? Store Energy? Package?

These are the kinds of questions for which Benyus hopes to offer a database of answers. Biologists, she says have been accumulating data about how plants and animals accomplish tasks for centuries, but have seldom had means to convey those findings to others who might find commercial applications. The institute will offer a kind of open-source repository in which to put their discoveries.

Not only will such idea transfer benefit companies, she says, but the biologists will often be able to patent aspects of these discoveries. (I can foresee some sticky issues there.)

But Benyus and her ideas bolster my hope we may still have time to rise above our seemingly-endless planetary challenges.

On the downside, think of how much biodiversity we have already let slip away. Could understanding the spectacular potential of biomimicry finally bolster our collective resolve to protect nature's irreplaceable resources?