The popular social networking service is tempting to Microsoft in the wake of its failed Yahoo assault, but there's no urgency to do a deal now. 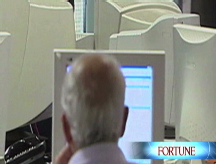 SEATTLE (Fortune) -- When Microsoft walked away from its blockbuster bid for Yahoo, the media sought desperately to keep the news coming even when there wasn't much left to say. That seems to be how The Wall Street Journal came up with the notion that Microsoft had approached Facebook about an acquisition. It's not true.

Good sources at Microsoft (MSFT, Fortune 500) recently have told me several things. First, that absent a shocking new development, the Yahoo pursuit really is over. Second, that there is no near-term interest in "replacing" the Yahoo deal with the purchase of another giant Internet business. Instead, smaller acquisitions of various sizes will continue over time.

Finally, there is virtually no likelihood of a deal soon either to buy Facebook or to increase Microsoft's share in the popular social networking site. Facebook remains of great interest to Microsoft management, but the fact that Microsoft's investment bankers may have contacted Facebook says little, if anything, about the true intentions of their client. (Facebook CEO Mark Zuckerberg isn't even around these days to broker a mega-deal. He's on a long around-the-world vacation trip, and is currently in India.)

Last year, Microsoft paid a royal price for a tiny piece of Facebook - $240 million for about 1.6%. Much has been made of the $15 billion valuation that the deal placed on Facebook.

Interestingly, a number of others have subsequently invested in Facebook, including Hong Kong billionaire Li Kai-Shing and German venture capital group Founders Fund. Rumors have it that some subsequent investments were done at a lower valuation than the one Microsoft accepted.

If true, that certainly underscores the theory that Microsoft was, and probably remains, keenly interested in Facebook. If it invested at that valuation without a provision to prevent others from paying less, Microsoft must have wanted to get in the door at any cost.

Microsoft Chief Software Architect Ray Ozzie is a friend and mentor of Facebook CEO Mark Zuckerberg, and the two talk often. It's worth remembering, too, that the investment was done in conjunction with another large deal of undisclosed size in which Microsoft sells display advertising for Facebook.

Long-term, Microsoft will probably seek to buy Facebook or up its stake. Here's one key reason why: As Facebook grows worldwide, the information it collects about individuals and their activities grows as well. But search engine software like Microsoft's cannot "crawl" this data as it could a regular website. Most of the data is available only with a password and often requires social-network "connections" to the people involved.

Microsoft, Google (GOOG, Fortune 500), and Yahoo - the big three of Web search - all have reasons to want to get close to Facebook so their search engines can mine the search data there. Microsoft succeeded in besting Google for the right to make a small investment last year. No doubt it will fight hard to retain that advantage.

But Zuckerberg, Facebook's young founder, has no interest in relinquishing control of his pride and joy. And Facebook doesn't really need another infusion of money right now.

That said, money talks. A sufficiently-high offer of, say $20 billion for the whole thing, would probably get Zuckerberg's attention. But for now there is no reason for Microsoft to pay that much. With Yahoo (YHOO, Fortune 500) it would have gotten the world's largest collection of online advertising inventory. Facebook is still figuring out how to make money out of the collective activity of its 70 million active members.

But perhaps another option presents itself to Microsoft. This week News Corp. executive Peter Chernin, in explaining slower-than-expected growth at company's MySpace business, was downbeat about the challenges of selling advertising on social networks.

MySpace is still the world's largest social network, and it is especially strong in the United States. Perhaps now News Corp. (NWS, Fortune 500) would be willing to sell it. For now, Google is its big advertising partner. That's all the more reason to imagine Microsoft making a move for MySpace - when it's finally ready.

Disclosure: I've just agreed to write a book about Facebook, entitled The Facebook Effect, to be published next year by Simon & Schuster.

Why Microsoft caved - for now
Fortune 500: Most profitable tech giants