The year of the vulture

The private equity firms that will thrive in the year ahead are those that know how to profit from others' misfortunes.

By Allan Sloan and Katie Benner

BANKS GO QUIET
Since the liquidity crisis hit, leveraged buyouts have not been a priority at U.S. investment banks. By Jia Lynn Yang
BEAR STEARNS
Bear Stearns Merchant Banking, a $2.7 billion fund, remains an independent entity; it is majority-owned by its nine partners. It also didn't work very closely with Bear Stearns for its deal flow. Post-merger, it's unclear how BSMB will work within J.P. Morgan - or whether it will be spun off. J.P. Morgan already has One Equity, a PE arm gained from 2004's Bank One merger.
GOLDMAN SACHS
GS Capital Partners has the biggest bank buyout fund - $20 billion in size - and it now faces some of the same challenges as its competitors. In April, GS Capital abandoned its $1.1 billion deal to buy rubber maker Myers Industries, paying a kill fee of $35 million rather than continue. Also, GS agreed to invest $260.5 million in the student-loan company First Marblehead, whose stock has tanked.
MERRILL LYNCH
In 2006, Merrill Lynch's private equity business helped the bank reach record profits, but last year the value of the investments fell $1.2 billion. And like other buyout firms, deals that were agreed upon last summer as now looking shaky: Merrill offered $1.3 billion to acquire radio compnay Cumulus, but the deal has yet to close, and the stock is now priced at half what Merrill agreed to pay.
MORGAN STANLEY
Morgan Stanley's latest buyout fund has a target of $6 billion, and the bank has also raised an Asia fund worth $1.5 billion. It continues to look for offshore opportunities, hiring two new co-heads for its European private equity operations last summer and bringing in an Indian PE expert this spring to scour the country for opportunities.
Private equity not gone yet 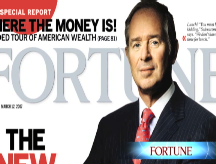 One slide read, "The collapse of a major investment house," evoking groans - Bear Stearns had collapsed two weeks earlier. "End of the 'leveraged' era," read another. "Middle East investor buys major stake in a U.S. bank." The audience nodded along to this drumbeat of bad news, thinking about how the Abu Dhabi Investment Authority had poured capital into Citi. But before the conference could turn into a wake, Klein revealed that the stories were not from this past year ... but from 1990 and '91. The bank in question was Drexel Burnham Lambert, which was a casualty of the junk bond collapse. The Middle Eastern investor in Citicorp was Saudi Prince Alwaleed bin Talal bin Abdul Aziz al Saud.

Plus ça change, plus la même chose, as they say in the fancy French restaurants the buyout boys frequent. The industry, as the more grizzled audience members recalled, had survived that implosion and grown into a $2 trillion colossus. Paraphrasing Charles Dickens, Klein went on to explain how 2007 was a tale of two halves. The first was ebullient: nine out of the ten biggest leveraged buyouts ever ("leveraged" means using borrowed money), and Blackstone (BX) becoming a publicly traded company. The second was one in which LBOs fell from almost 40% of the dollar value of deals through July to a single-digit market share.

While the days of the brainless megabuyout are over (at least for now), private equity has not gone away. It has just retreated. Veteran dealsters say they welcome the current separation of the men from the boys, of the serious players from those who merely surfed on waves of cheap debt but have now wiped out. "[These periodic shakeouts] are what keeps the industry healthy," says Blackstone's president, Tony James, who's been in buyouts for almost three decades. "It squeezes out a large number of marginal players." TPG (formerly Texas Pacific Group) co-founder Jim Coulter describes the sea change this way: "There aren't 100 bankers showing up with companies they want you to buy, but the ones they're offering are much more interesting."

What's different in private equity now from its last meltdown, in the late 1980s? Answer: It's become part of the landscape in a way that it wasn't 20 years ago. If you get coffee at Dunkin' Donuts, stay at a Hilton, or drive a Chrysler, private equity is part of your life. If your pension fund has money invested in buyouts, these guys' performance will have a say on whether your golden years are spent eating caviar or cat food. Many public-employee pension funds have a piece of buyout action (or soon will), and if they don't make their projected returns, governments will turn to taxpayers to make up the shortfall.

So what do smart people do when they're confronted with violent change in the markets? For starters, they're engaging in what we'll call "double cropping," which we'll explain in a minute. Second, they're making grand plans to profit off the next boom by becoming publicly traded companies. That's the same transformation that a previous generation witnessed when a handful of brokerage houses began going public in the 1970s. They ultimately morphed and consolidated into a handful of dominant asset-management firms: Merrill Lynch (MER, Fortune 500), Goldman Sachs (GS, Fortune 500), Morgan Stanley (MS, Fortune 500), and Lehman Brothers (LEH, Fortune 500). The private equity firms don't want to be just buyout shops; they want to be full-service financial restaurants offering customers not only LBOs but also hedge funds, bonds, money management, and anything else that can turn a good buck.

As for double cropping, it's a classic example of the way the largest private equity firms can adapt to violent changes in the markets. Okay, you can't buy companies anymore, but you can make a second profit from the buyouts you've already done. How? By offering capital to the institutions with the greatest need - the banks that financed your original deals.

The banks, nowhere near as clever as their clients, figured they would sell most or all of the takeover loans they were making (at face value, if not more) to institutions throughout the world, ending up with some nice fee income while having little or none of their own capital at risk. But when the credit crunch began last summer, the music stopped and the banks lost their would-be dance partners.

Enter the buyout firms, which have tons of new money flowing into their funds. What to do with it? Rummage for value in banks' used-loan inventory, like a vulture seeing sustenance where others see only roadkill. "The flavor of the day is buying your own debt at below face value," says David Rubenstein, co-founder of the Carlyle Group. "I'm buying bank debt in my deal with leverage from the bank that made me that deal."

You have to love it. First, banks provided lavish financing for the takeovers, making it possible for LBO firms to show double-digit returns to investors even if the properties themselves produced gains in single digits. (Example: Borrow $5 billion at 6% to buy a $6 billion company that's growing at 9%, and you make 24% on your $1 billion investment.) Now the banks are lending their borrowers money to cart off the loans at a discount, giving them another bite at the buyout apple.

Consider, if you will, the biggest double-cropping transaction to surface thus far: a deal in which Citi sort of unloaded $12 billion of buyout loans onto Apollo, TPG, and Blackstone. The firms stand to make double-digit returns because they get to borrow so much money from Citi - and they've even managed to limit their risk.

We're saying "sort of unloaded" because Citi didn't sell the paper to the buyout groups, contrary to what's been reported. Rather, Citi and the firms did so-called total-return swaps. The firms forked over $3 billion of cash and agreed to pay Citi interest (at a low 1% over the London Interbank Offered Rate) on $7.8 billion. In return Citi will pay the firms the interest and principal repayments generated by the $12 billion portfolio.

Doing a swap rather than a sale avoids various complex financial and legal problems. It also means that the buyout firms are on the hook for only the cash they've put up, unless they choose to put up more. So if the loans prove to be truly disastrous, they will be Citi's problem all over again.

This kind of transaction isn't as sexy (or lucrative) as lining up the first $100 billion buyout. But hey, it makes a buck, gives you something to do, and helps cover the overhead. Double cropping leveraged loans isn't likely to produce the 25% or so (before fees) returns to which buyout fund investors have become accustomed (or would like to become accustomed). But it beats a sharp stick in the eye. If the firms' analysis is reasonably accurate, they can realize returns in the high teens or low 20s (before fees) from buying this paper, which is a far less risky investment than putting up the equity in an LBO.

One reason banks are so eager to do these deals is that the takeover loans made late in the cycle tend to be really messed up. That's because banks were competing so hard for buyout business that they took leave of their senses. At a gathering of business journalists last month, Carlyle's Rubenstein riffed on the way banks were competing to finance buyouts on increasingly ridiculous (for the lenders) terms. After playing the banks off against one another, Rubenstein said - a big smile on his face as he milked laughs from the crowd - the firm ended up with a deal that worked like this: "I don't have to pay the debt on time, I don't have to write covenants, I don't have to worry about nuclear bombs, I don't have to have any equity. I'll do that deal."

In a more serious vein, consider a study of post-2003 buyout debt by Marty Fridson's Distressed Debt Investor. Fridson, who's been around high-yield debt since back in the day when it was known as junk, says that before the lending excesses started in 2004, buyout debt followed a familiar pattern: The longer the debt had been outstanding, the more likely it was to be distressed (which he defines as yielding ten percentage points or more above equivalent Treasury securities). The reason: The longer a buyout has been around, the more chance it has had to run into economic problems.

The good news is that now is better than in mid-March, when Fridson found a full 50% of these issues to be distressed.