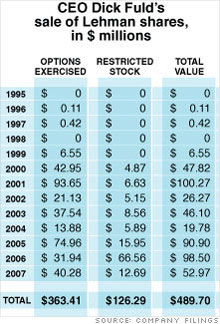 In part because, irony of ironies, CEO Fuld, who prevailed in a decades-long battle for Lehman's soul, adopted the policies of the people that he and his trading floor allies fought so bitterly in Wall Street's most famous civil war of the 1980s.

The trading faction, which included Fuld and was led by his then-boss, Lew Glucksman, wanted the firm to stick to its traditional knitting of trading and underwriting securities. The banking faction, led by Steve Schwarzman and Pete Peterson, wanted to use the firm's capital aggressively to do risky deals.

The traders prevailed then - but Fuld ultimately adopted large elements of the bankers' proposed strategy. It's as if Jack Welch had decided during his GE days that the touchy-feely school of management was right after all and began walking the halls to ensure that people were happy. Lehman eventually sold itself to American Express in 1984. Schwarzman and Peterson left to start Blackstone Group and become multibillionaires. Fuld stayed at Lehman.

Neither Fuld, a passionate Lehman lifer, Schwarzman or Peterson would speak with Fortune. A Lehman spokesman said the firm wouldn't cooperate either, because our questions were "unfair and biased."

It's tempting to blame Fuld for everything that's gone wrong at Lehman. After all, the man took credit for the firm's successes (while throwing the occasional victim under the bus when there were problems) and got a corporate rock star compensation package.

By Fortune's math, Fuld has realized almost half-a-billion dollars in cash - $489.7 million, to be precise - by cashing in stock options and restricted stock that he was granted. (That's a pretax number.) He's also knocked down wads and wads of regular old money.

Done in by a financial arms race

But a significant part of Lehman's problem doesn't stem from Fuld's management - it's because the firm suffered collateral damage from Washington's decision a decade ago to repeal the Glass-Steagall Act, adopted during the Great Depression to separate investment banking from commercial banking.

Until Glass-Steagall disappeared, one of the attractions of owning a piece of an investment bank was that it was asset-lite. The major asset - the firm's people - went home at night. The financial assets were generally liquid (which means easily sellable at the market price). And because they weren't burdened with multibillion-dollar investments in real estate or corporations, investment banks had staying power and could wait for bad markets to recover.

The repeal of Glass-Steagall would change that. Ask Chris Andersen, chief executive of investment boutique Andersen Partners and, at 70, one of Wall Street's grand old men. When Glass-Steagall was adopted in 1999 to let Citi and Travelers (which have since split apart) combine, Andersen notes, commercial banks promised not to use their balance sheet to compete with investment banks, which traditionally had far smaller capitalizations.

"Of course, the minute Glass-Steagall was repealed, the commercial banks began using their balance sheets to compete, offering loans if they also got to do equity offerings as well as arranging public debt financials for transactions," says Andersen.

So investment banks like Lehman bulked up to compete with the Citis and J.P. Morgan Chases (JPM, Fortune 500) of the world, setting off a financial arms race to compete on size and scope.

The arms race - and the associated risk for Lehman - has grown exponentially more intense since 2004, when the world began to find itself awash in cheap short-term money, and globalization and dealmaking increased the call on Lehman's capital for things such as leveraged buyouts-and real estate.