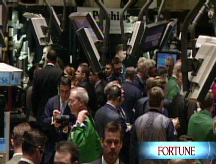 When firms like Citi (C, Fortune 500) and Merrill and Morgan Stanley (MS, Fortune 500) began fessing up to big problems related to the real estate bubble popping and the ensuing worldwide credit squeeze, Lehman insisted all was well. It even managed to show a $489 million profit for its first quarter, but only with accounting so aggressive and bizarre (albeit legal) that it undercut faith in Lehman's numbers.

Lehman took a $722 million paper profit in the value of its so-called Level 3 equity holdings - stocks that don't trade publicly and for which there aren't liquid markets. This means that Lehman claimed a 9% profit on its private-market stocks during the same period the Standard & Poor's 500 index of publicly traded stocks fell by 10%. Hmmmm.

David Einhorn, a short-seller whose questions about Lehman's balance sheet have confounded its management, says the firm's since-deposed chief financial officer, Erin Callan, told him $400 million to $600 million came from writing up the value of electric generating plants in India - Einhorn feels that only about $65 million was justified. (Lehman, as we've said, declined comment.)

Lehman also showed a $600 million profit because of the decline in the market value of its own debt obligations, whose price was falling because of perceptions that the company was in trouble. That's permissible accounting - but these are ugly, low-grade earnings, not unlike the "profit" you make when your house is foreclosed at a value lower than your mortgage.

And finally, we found that Lehman created another $176 million by almost doubling (to $365 million) the value it ascribed to certain mortgage servicing rights. Servicers get paid by mortgage holders for collecting payments and handling paperwork, and valuing servicing rights is notoriously tricky.

Until recently Lehman managed to raise capital without getting its stock price killed. The neatest move came on April 1, when Lehman sold $4 billion of preferred stock convertible into common stock. For arcane reasons we won't bore you with, when a company sells a big convert issue, convertible arbitragers - who make money exploiting differences between the prices of convertible issues and their underlying common stock - short the common like mad, driving down its price.

But Lehman kept the arbs at bay by placing the vast majority of the issue with large, long-term holders of its common. This helped precipitate a short squeeze, and Lehman's stock rose 18% (to $44.17 from $37.50) the day of the issue, rather than declining as the market expected.

But in a second sale last month Lehman seemed to have lost its touch - or gotten desperate. It sold $4 billion of common stock and $2 billion of convertible preferred, but seems to have placed much of the preferred with hedge funds and arbs that shorted the common, which promptly plummeted. That bummed out investors who bought the common, and the declining price increased the talk about Lehman's problems.

While we won't get bogged down in the minutiae of collateralized debt obligation exposures - which Lehman has done a better job of avoiding than Merrill, Citi or UBS (UBS) - the exposure it does have poses serious potential problems.

Lehman's filings indicate it has about $6 billion of CDO exposure. About a quarter of them are rated BB+ or below. These low-rated arcane, illiquid bonds-made-from-other-bonds are worth maybe 10 cents on the dollar. That indicates a loss of at least $1 billion. There are likely additional losses looming in the other three quarters of the portfolio.

What's next for Lehman

We're not predicting that Lehman will fail - it won't because of the Federal Reserve Board, which has let it be known that it will lend Lehman (and any other investment bank it deems worthy) enough money to avoid collapsing, the way Bear Stearns did.

Lehman has been in trouble before - the collapse of the Long Term Capital Management hedge fund in 1998 started rumors it was insolvent, the 9/11 terrorist attacks traumatized employees and made its headquarters near Ground Zero unusable - and it somehow managed to escape and prosper and stay independent.

But this time we suspect that because of pressures we foresee both from the capital markets and regulators, Lehman will ultimately end up owned, once again, by a much larger institution.

So let's close by going back to where we started: McAllister Ranch. An official with SunCal, the project's developer, says the company "remains committed to seeing that this community becomes a reality." When we tried to get a tour of the property, a man in a Hawaiian shirt and shorts, who clearly isn't an investment banker, emerged from deep inside the development's darkened sales office.

His final words as he shooed us off: "This is not a public business." Which may be said of Lehman soon.

Editor's Note: An earlier version of this story gave multiple figures for Lehman's capital and leverage. This version eliminates the inconsistency.

Editor at large Richard Siklos contributed to this story from Bakersfield, Calif.

Inside the fall of Wall Street's most powerful woman