There is no shortage of chatter about a possible bailout of two of the most important companies in the world. What would that look like and is it even necessary? 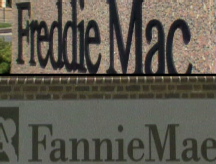 NEW YORK (Fortune) -- The two companies underpinning much of the global capital markets' debt and derivative trading are in a world of pain, and various media outlets reported that government officials were considering several options for intervention.

So what would government relief look like, and is it really necessary?

The current thinking, according to senior mortgage executives who describe themselves in frequent contact with Fannie Mae and Freddie Mac, centers around the U.S. Treasury Department's offering some form of a guarantee to $1.5 trillion of their debt. Perhaps more important, such a guarantee would also extend to the $2.3 trillion worth of derivatives that both companies are party to in some fashion.

Another idea making the round of trading desks and hedge funds Friday includes a more "moderate" direct-investment from the Treasury of up to $10 billion for each company, perhaps in the form of buying triple-A debt securities directly from their portfolios.

The problems with this are obvious: Putting more mortgage credit risk on the taxpayer's back is likely to be politically unpopular in the short term and would only immediately benefit the company's shareholders.

The perception of shareholder benefit from government intervention is something that policy makers were greatly concerned about during the Bear Stearns crisis in March. As such, any plan to help Fannie or Freddie, real or prospective, is almost certain to wipe out the value of their common stock

As of late Friday, a huge government intervention appeared unlikely - at least in the immediate future. Freddie (FRE, Fortune 500) and Fannie (FNM, Fortune 500) both bounced back after reassuring words from Secretary of the Treasury Henry Paulson and Senate Banking Committee Chairman Christopher Dodd.

Dodd made a point of saying that the companies were sufficiently capitalized. And he's onto something. Their combined equity capital bases are $75 billion to $80 billion.

A worst case scenario for credit losses is between $35 billion and $40 billion over the next 12 months, according to a report by Friedman, Billings, Ramsey Group, an investor in mortgage-related assets. So concerns of immediate collapse seem overwrought.

In addition, investors are hoping Fannie and Freddie's funding needs for the immediate future could be put to rest if Federal Reserve chairman Ben Bernanke allows both companies to borrow directly from the so-called discount window, like commercial banks do. That would mean they wouldn't need to go to the public debt markets to raise money to keep operating.

However, Federal Reserve spokeswoman Michelle Smith told CNN late Friday that no discussions with Fannie or Freddie about access to the discount window have taken place.

Smith added that "the Fed is following the situation with Fannie and Freddie closely" and that she was "not prepared to discuss the range of options and alternatives" available to the Fed regarding Fannie and Freddie.

And besides, both GSE's continue to enjoy widespread support from the debt market, where they are large-scale issuers of short-term debt that isn't subject to revocation, like repurchase agreements. Veteran mortgage analysts told Fortune that Fannie and Freddie have their financing needs in place through the end of next year. In fact, save for the U.S. government, the GSE's likely pay the lowest borrowing costs in the world on their debt.

As shareholder value is wiped out by billions daily, the GSE's debt continues to appreciate in value, according to prices from mid-afternoon Friday trading.

Where Freddie Mac and Fannie Mae have gotten into real trouble before is when their funding costs sharply outstripped their interest income, as happened in the early 1980s when the Paul Volker-era Federal Reserve ramped up interest rates to choke off inflation. Though interest rate increases might be in the offing again, few forecasters see dramatic hikes in the offing.

The $5 trillion mess - how we got here