There's good news on oil, stocks and the dollar. So why is the bond market freaking out again? 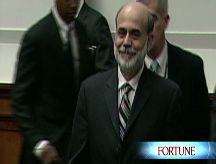 NEW YORK (Fortune) -- Don't look now, but the markets could be headed for another stomach-churning drop.

U.S. stocks have rallied over the past month, as the price of crude oil has tumbled after a long run-up and the dollar has rebounded from a long decline. The dollar's bounce and oil's fall have delivered some badly-needed good news to consumers pinched by a weak job market and to companies squeezed by soaring materials and transport costs.

But if the past month's developments in the stock, currency and commodities markets have been welcome, there are other signs that the good feelings could be short-lived. Take a look at the credit markets, where borrowing costs are rising for all sorts of companies as spreads between safe Treasury securities and riskier corporate bonds expand.

These trends suggest that bond investors don't share the rosy view being exhibited lately by shareholders - a divergence that, given the bond market's past success in predicting stock market action, may point to a coming pullback in stocks.

"Credits spreads, especially in the financial sphere, may remain vulnerable to upside pressure," wrote Merrill Lynch economist David Rosenberg in a note to investors Monday, "and this will only reinforce the vulnerability of this bear market rally in equities."

After a lull, fear is back

It's no mystery why credit spreads are widening in the financial sector. Shares in Fannie Mae (FNM, Fortune 500) and Freddie Mac (FRE, Fortune 500) staged their latest pratfall Monday as investors resumed worrying about a possible government bailout of the mortgage firms. And the Wall Street Journal reported Lehman Brothers (LEH, Fortune 500) could be looking at another multibillion-dollar loss in its fiscal third quarter ending this month.

Even mighty Goldman Sachs (GS, Fortune 500) is looking at a bigger writedown bill this quarter, analysts at Fox-Pitt Kelton wrote Monday, joining skeptical analysts at firms such as Merrill Lynch and Deutsche Bank. Analyst David Trone cut his third-quarter earnings estimate to $1.95 a share from $3.26, citing an expected $2.1 billion in third-quarter writedowns.

But even before Monday's raft of bad news, there were worrisome signs in the financial sector. Financial giants such as American Express (AXP, Fortune 500), Citi (C, Fortune 500) and AIG have lately paid big premiums to raise billions of new cash in the bond market. Last week, AIG offered investors an 8.25% yield for $3.25 billion of 10-year notes, and Citi offered 6.5% for $3 billion of five-year notes. Those yields are substantially above the rates the companies paid earlier this year, reflecting continued uncertainty about the firms' finances after tens of billions of dollars in writedowns.

Bond buyers "are trying to scale back on the financial-services side," said William Larkin, a portfolio manager at investment adviser Cabot Money Management in Salem, Mass. "There's just too much volatility."

Larkin sees good opportunities in some areas of the bond market, particularly among short-dated issues in the triple-B-rated area - the lowest investment-grade level - where he says "yields are very compelling."

Financial fears are visible elsewhere in the bond market as well. Rosenberg notes that the spread between the yields of the 10-year Treasury note and lower-rated corporate bonds, dubbed the 10-year Baa spread, recently hit 326 basis points, or 3.26 percentage points.

The 10-year Baa spread fell as low as 150 basis points during the credit boom earlier in this decade before jumping to around 225 points at this time last year, as the market for mortgage securities collapsed under spiking defaults on loans made to the least creditworthy borrowers. After briefly narrowing last fall, spreads grew steadily wider throughout the winter before reaching almost 350 basis points at the time of the collapse of Bear Stearns.

Spreads then narrowed through the spring, tightening to 290 basis points in mid-June - and foretelling the rally that has taken the Nasdaq up 10% and the S&P 500 up 7% off their mid-July lows, Rosenberg writes.

But now, with the 10-year Baa spread again above 300 basis points and closing in on its mid-March high, credit markets are predicting a stock market decline. And given that "there is a very tight link between the direction of credit spreads - 88% correlation - and the performance of the equity market," Rosenberg wrote, investors might do well to tighten their seat belts.

Why the dollar rally won't last