In Fannie mess, McCain and Obama play to type

Republican blasts 'cronyism' that led to problems. Dem notes the complexity of a clean-up.

Your Money: McCain vs. Obama
See where the presidential candidates stand on the major economic issues.
View guide
Dodd: Paulson's 180 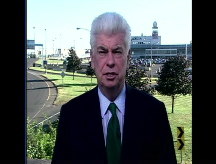 (Fortune) -- There may be no better place to witness the contrasting personal styles of the two men competing for the Oval Office than in their reactions to the crisis surrounding mortgage giants Fannie Mae and Freddie Mac.

Officially, both candidates supported the Treasury Department's takeover of the government-sponsored entities - created by Congress to foster home ownership, they're also publicly-traded corporations - as a necessary evil to prevent catastrophe in the mortgage market. Both men claim they've been calling for reforms to forestall this day of doom (though neither has ever led a substantial charge to reform these politically-connected behemoths).

McCain's team, determined to burnish its man's reformer-outsider status despite 22 years in the U.S. Senate, came out swinging at the troubled Fannie/Freddie mortgage complex.

"It's a bailout," senior economic policy adviser Douglas Holtz-Eakin corrected me when I used the words "rescue" and "takeover" in our conversation. "Crony capitalism," Holtz-Eakin proclaimed minutes later - a reference to the 50-plus stable of lobbyists Fannie (FNM, Fortune 500) has employed over the years to prevent congressional passage of reforms aimed at reining in the companies.

McCain believes that, at this point, the intervention probably couldn't have been avoided. "The ship has sailed," said Holtz-Eakin. But the Republican nominee wants this to be the first step toward shrinking both companies - which together are financing about 70 percent of home mortgages - and fully privatizing them to prevent taxpayers from picking up any future tabs. Meanwhile, he wants to ban Fannie/Freddie from hiring lobbyists.

Here's what McCain, who has co-sponsored legislation to reform the agencies, wrote in July, after Treasury Secretary Henry Paulson first revealed plans for potential government intervention: "Americans should be outraged by the latest sweetheart deal in Washington. Congress will put U.S. taxpayers on the hook for potentially hundreds of billions of dollars to bail out Fannie Mae and Freddie Mac. It's a tribute to what these two institutions...have bought with more than $170 million worth of lobbyists in the past decade."

In that same piece, McCain called Fannie and Freddie (FRE, Fortune 500) "the poster children for lack of transparency and accountability. Fannie Mae employees deliberately manipulated financial reports to trigger bonuses for senior executives...and now they are endangering financial markets." A President McCain - saying he doesn't want to "stick Main Street Americans with Wall Street's bill" - would pursue plans to "make them go away."

In contrast, Obama - a first-term Senator hoping to reassure voters that he has the judgment to lead - was all rounded edges.

On Sunday, his campaign released a statement that tracked the carefully crafted, cautious words he offered back in July, when trouble first surfaced. That statement was the product of phone meetings with a growing team of economics advisers, beginning with economic policy director Jason Furman's call to former Treasury Secretary Lawrence Summers, followed by a conference call with several prominent economists, and ending with Furman's recommendations to Obama and a draft statement.

"We knew what the broad set of principles were," Furman recalled in an August interview. "The question was how to apply them." That said, the Democratic nominee's statements continue to sound more like a set of principles than a plan of action.

Furman declined to comment on the details of the Fannie/Freddie takeover, other than to say "it seems like it is in the right ballpark" but needs further study. And Sunday, Obama merely reiterated his philosophical goals, saying any government action should be mindful of maintaining a steady flow of capital toward affordable housing; should protect taxpayers and not bail out shareholders and management or cater to special interests; and should clarify "the true public and private status of our housing policies."

Likewise, the Obama camp, mindful that Fannie and Freddie have played a role in making housing more affordable, is unwilling to say - as McCain does - that the agencies should be shrunk or privatized. "You need to be mindful of the complexity and tradeoffs" of all the options moving forward, said Furman.

While Obama, like McCain, wants to protect taxpayers, he lists his first priority as preserving affordable housing. When the subprime mortgage crisis erupted early last year, Obama sent a letter to Paulson and Fed Chairman Ben Bernanke urging them to convene a "homeownership preservation summit" to fight foreclosures.

When asked about McCain's charge that that Fannie and its lobbyists represent "crony capitalism" at its worst, Obama aides like to point out that McCain campaign manager Rick Davis once served as president of the Homeownership Alliance, an advocacy group backed by Fannie and Freddie.

Of course, they failed to mention that Obama tapped former Fannie chief and big-time Democrat James Johnson to run his vice presidential search - though Johnson was dumped after news reports surfaced that he had received favorable loan deals from mortgage lender Countrywide Financial (BAC, Fortune 500).

Meanwhile, as the Fannie/Freddie saga unfolds, Obama will be on the phone seeking more input - this time from the two Democrats at the center of the crisis: Barney Frank, chairman of the House Financial Services Committee, and Chris Dodd, who heads the Senate Banking Committee.